Two weekends ago I traveled to Idaho to experience some the country’s best bicycling.  The Inland Northwest’s trails are a spectacular pleasure, and if you’re a Seattle cyclist you really owe it to yourself to experience them. And with a combination of Amtrak, Greyhound, and/or local transit, it’s possible to do it all without a car.

The silk-smooth asphalt and (almost) complete separation from traffic allow even a casual cyclist to ride safely and without intimidation. Over  the course of 134 scenic miles, you can travel through and alongside many distinct ecoregions: dry pine parklands, river valleys, glacial lakes, boggy wetlands, and mid-montane forest.

From Spokane to Coeur d’Alene, The Centennial Trail offers 60 total miles of paved trail from Nine Mile Falls eastward to Higgins Point (though it’s just 35 miles from downtown Spokane to downtown Coeur d’Alene).  Heading east you begin an unnoticeable climb to the Idaho border, where the sparse pine parklands begin to thicken and you start feeling the transition back into the wetter Rocky Mountain forests.  Once in Coeur d’Alene, the trail hugs the spectacular northern shore of Lake Coeur d’Alene, where you can really appreciate the awesome erosive power of the Missoula Floods.  The city of Coeur d’Alene is also worth exploring in its own right.  With a population of ~50,000 – and sporting an unusual number of high rises (three 200′ towers) – the city has aggressively pursued bicycle improvements since the adoption of their Bikeways Master Plan.

More than you could possibly want to know after the jump…

But the real jewel is the Trail of the Coeur d’Alenes.  At 73 miles from the tribal town of Plummer to the tiny town of Mullan near the Montana border, it is one of the longest paved rail-trails in the country, and certainly the longest paved trail in the Northwest.  In an effort to contain century-old mining waste present in the soils and ballast, the trail was constructed more for environmental mitigation than for purely recreational purposes, but don’t let that deter you!  From Plummer the trail descends 8 swift miles to the southern shore of Lake Coeur d’Alene, where you cross the lake on the 1-mile (and bike-ped only!) Chatcolet Bridge.  From there it’s a smooth and flat 45-mile ride through the wetlands and lakes adjacent to the Coeur d’Alene River to the ski town of Kellogg, where the trail begins a gentle 2% climb to Wallace (famous for forest fires and bordellos) and Mullan.

(If you have time, a vehicle, and a mountain bike, The Route of the Hiawatha is definitely not to be missed, a soft surface trail that descends 1,000′ over 13 miles over high trestles and through a 1.6 mile tunnel.) Other regional trails you might want to try are the Fish Lake Trail (from Cheney to Spokane) and the Prairie Trail (a 6-mile suburban spur off the Centennial Trail).

Transit options are limited but will get the job done.  (Not wanting to box my bike, I rented a car and drove to Kellogg, took Greyhound back to Coeur d’Alene, took CityLink to Plummer, and biked 55 miles back to the car.)  Spokane is accessible via Amtrak, Greyhound, Northwest Trailways, and Horizon Air.  Spokane Transit can take you as far east as Liberty Lake, where there is a 9-mile gap between where Spokane Transit ends and Idaho City Link begins.  Idaho City Link is a free, pulse-based system operating circulators on hourly headways with timed transfers, but there just happens to be surprisingly good service to the Plummer Trailhead via the Link and Rural routes.  Once in the mountains, Greyhound is your only option, with two departures from Kellogg daily (with service to Coeur d’Alene, Spokane, and Seattle). There is a bike shop adjacent to the trail in Kelloggthat will give you a free bike box for Greyhound Travel. 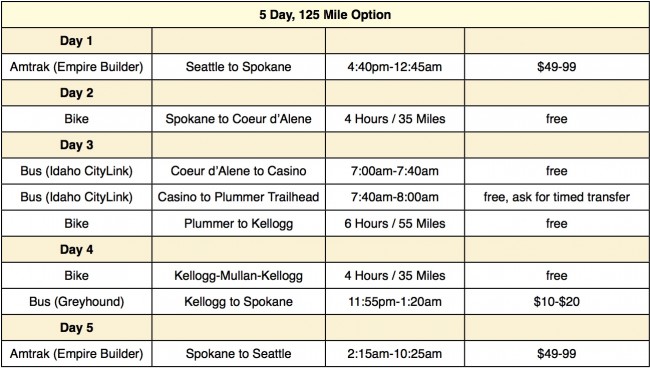 6 Replies to “Eastern Washington and Idaho by Bike and Transit”