On Tuesday, a commenter listed whether a bus stops at “stabtastic” 3rd and Pike as one reason to drive.  Having recently reviewed some Seattle crime data, this seems like it might be more a case of trusting feelings and media more than data.  Yes, 3rd and Pike doesn’t “feel” safe.  But downtown actually is quite safe.  Let’s start with this Trulia heat map of crime: 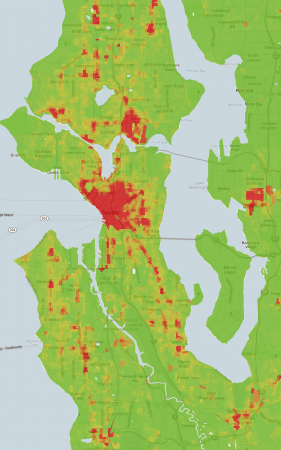 Not pretty for downtown, right?  But you have to keep in mind there are more people downtown than elsewhere.  A map of people with brown pants might look similar, yet walking downtown has nothing to do with the color of your pants – there are just more pairs of pants downtown than elsewhere.  Also an interesting map on Trulia, check out the ratio of violent to nonviolent crime: 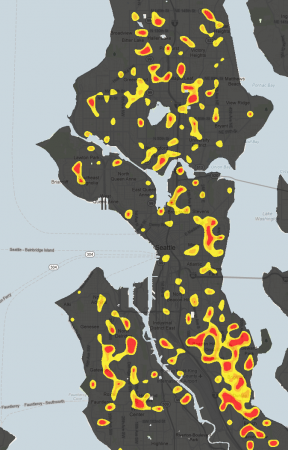 Downtown is all but gray, meaning a very low proportion of crime is violent.  Surprising, given the stereotypes of highly urban areas.  Clicking on SpotCrime’s map of 3rd and Pike, most of the “crimes” listed nearby were actually arrests*.

These Trulia maps are great, but they don’t quite get at what we want to know: how safe am I walking down the street?  Ideally, we’d have a pedestrian count for every sidewalk at different times of day, and we can compare that number with the number of crimes.  The lower the crime/person ratio, the safer that stretch of sidewalk is.  However, I’m not aware of a good census-mapped count of pedestrians.

So here’s what I’ve done.  I took census data on population, and census data on employment, and compared it to crime data.  My hope is that if you count the number of residents in an area and the number of employees in an area, you can use this as a rough comparative guide for how many people are on the street at any given time.  It certainly won’t be perfect – it will tend to overcount pedestrians in car-dependant areas and undercount them in walkable areas, but it’s a start.  Here are the maps I created:

Other than the International District and perhaps Pioneer Square, downtown doesn’t look that much different than the rest of the city.

The Seattle Police Department only has census-level crime data from 2007.  Apparently they have better things to do than update maps, but I won’t complain.  So I used 2000 census data for both population and employment, since that’s the data they would have used at the time plus I wanted to avoid issues with a change in census tracts in the 2010 data set.  I’m fine with losing the freshest data, since the conclusion would be the same.  The charts represent crimes / (population + employment) for each census tract.  I considered violent crimes to be murder, rape, robbery, and aggrivated assault.  For Violent Crimes the color groups are <.004, <.008, <.012, <.016, <.02.  Non-Violent Crimes groups are <.06, <.12, <.17, <.23, <.29.

* Within a few blocks the 11 non-violent crimes consisted of 8 arrests, 1 car break-in, 2 accounts of shoplifting

55 Replies to “The Myth of Downtown Crime”