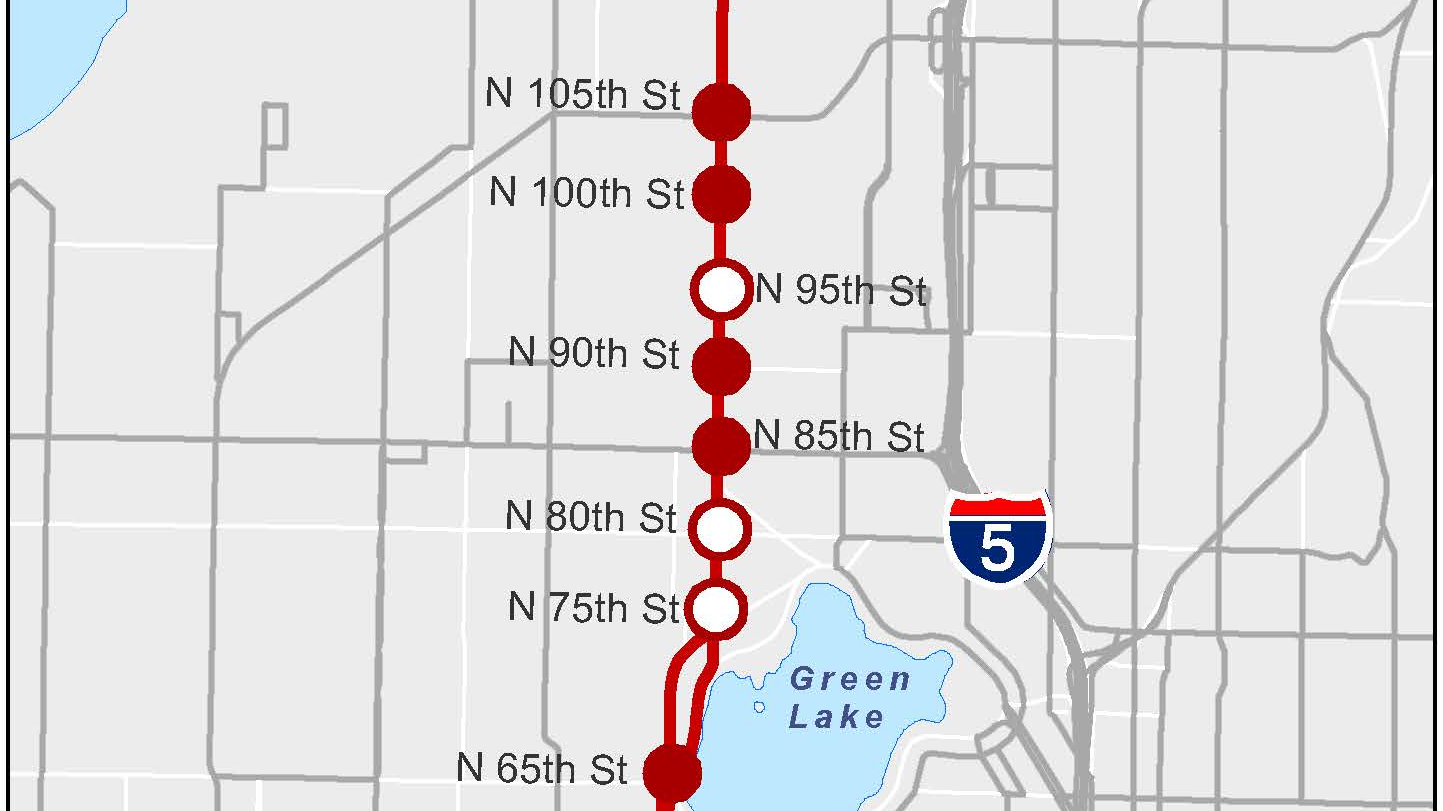 One of the more painful parts of being a transit advocate in Seattle is watching King County Metro — carefully, deliberately — load, aim, and shoot itself in the foot. Over and over again. This time, Metro is proposing to add two more stops to the E Line, as part of its final legislative package to the King County Council; a package which, once enacted, will enshrine the alignment and stops of the E Line in law. The two stops are among those currently served by the 358, on Aurora Ave at 80th St and Lynn St. If adopted, this change will further reduce the speed and reliability of a route which already has entirely too many stops and not enough bus lanes to be anything remotely resembling “rail on wheels“, as FTA Administrator Rogoff recently described RapidRide (presumably to a chorus of tittering laughter).

No, the smart thing — for both riders and taxpayers — would have been to go to the council with a package that removed the two superflous stops at 90th and 100th St, which would have given RapidRide E a fairly consistent stop spacing of roughly half a mile in the populated areas between Belltown and Shoreline. (The stop situation in Shoreline is even worse, but the City of Shoreline is the main culprit there — those stops were retained at the city’s request). That half-mile stop spacing is exactly what’s called for Metro’s Service Guidelines (page SG-13, #6), and that standard exists for a reason: transit that stops less is a faster and more reliable way to get around the city; and if the overall quality of the service (safety, speed, reliability, frequency) is high enough, riders are willing to walk further to the stops. Adding the 80th St stop will just compound the error of maintaining the stops at 90th and 100th.

The Lynn St stop, while not violating the half-mile standard, is just as bad as 80th, but in a different way. Looking at the ridership chart I compiled for my post on the origins of our current Aurora service, the current 358 stops on Lynn and Crockett stand out as having paltry ridership. This isn’t surprising when you consider that this stretch of Aurora is basically an unpopulated wasteland dug into the side of a hill. (There are lots of apartments on the east side of Aurora, but those buildings almost all face Dexter, which is an altogether nicer place to catch a bus); moreover, those stops are already very well served by Routes 5 and 16. Far more riders will lose out, and far more transit riders will be lost, due to the delay of making this stop, than will gain or be gained due to its presence.

It’s particularly galling to read about changes like this when other cities are using the idea of Bus Rapid Transit as more than just an way to get the FTA to pay for new buses. For example, San Francisco is moving ahead on the Geary and Van Ness BRT projects, projects which represent a plausible attempt to raise bus service on those streets to the level of SF Muni’s rail lines* — at a fraction of the cost. I realize those projects have budgets that are an order of magnitude larger than RapidRide, and I don’t fault Metro for not having the money to execute such ambitious plans, nor for not having all the money expected from the passage of Transit Now. I do fault Metro (and the King County Council) for lacking the gumption to make zero-capital-cost improvements to the design of their bus network that would drive ridership and reduce operating costs.

* I’m aware, by the way, that Muni has plenty of dysfunction of its own, and its rail lines aren’t exactly paragons of transit excellence.