There’s a nasty little item buried in Metro’s package of administrative changes for the September shakeup. Service between downtown and Magnolia (Routes 24 & 33) will end at 9:30 PM, along with service on Route 27. This means that the last bus departing downtown on those routes will do so around 9:30 PM, and as Magnolia has no other bus service in the evenings (Route 31 ends at 7:30 PM), this completely cuts Magnolia off from the bus network after that time. Back in April, when pressure from residents caused Metro to suddenly drop the Magnolia restructure, I argued:

Whereas in the previous proposal, Magnolia residents would have had a connection to Ballard, now Magnolia will remain a transit dead end. If abandoning the change was due to local opposition (and it’s hard to imagine what else it could be), the neighborhood has cut off its nose to spite its face. Or, perhaps more likely, a handful of people vociferously opposed to any change have scuttled a change that would have benefitted many more of their unwitting neighbors.

To that we may now add that the unwillingness to contemplate this route change is not just a missed opportunity to improve the neighborhood’s connectivity, but has now undeniably degraded the utility of transit in Magnolia. Along with frequency, span of service is a fundamental determinant of usefulness in a fixed-route service, and there are, for example, a raft of events in downtown Seattle and at the Seattle Center for which Magnolia residents will no longer be able to use transit, and Magnolia is now even more inaccessible to transit visitors from other neighborhoods than it was before — no mean feat.

I queried Metro about the rationale for this change, and received an answer from lead service planner David Hull, after the jump.

This night period span reduction is consistent with our service guideline direction.  Route 24 night period performance ranks in the bottom 25% for route serving Seattle core areas.  Other routes that night period productivity ranks in the bottom 25% (rides per platform hour and passenger miles per platform hour) will also see span and/or frequency reductions in September.  The productivity guidelines were administered consistently — examples are routes 14N, 14S[*], and 27.

I can’t argue with the truth of these statements, but there are alternatives besides maintaining the status quo and cutting service altogether, and if there is any situation that warrants the effort to find a middle ground, it is surely this one. Consider the differing geographic value of Routes 24 and 33 versus Route 27: 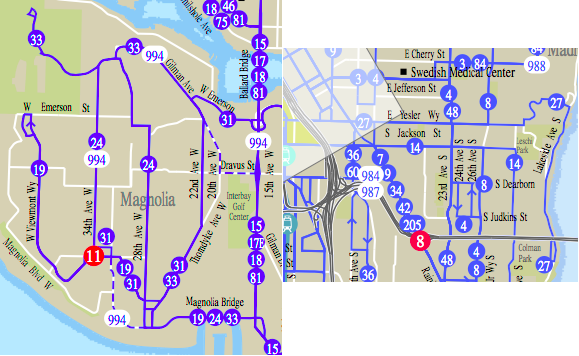 Between 12th Ave and 31st Ave, the 27 is fairly flat three-block walk away from Route 14, and west of 12th Ave, most of the 27’s walkshed is within walking distance of the 3 and 4. The only people losing access to transit are the relatively small number on the sliver of land near Lakeside, who’d have a very steep walk up a hill to 31st Ave. By contrast, almost everything in Magnolia is at least a mile walk away (in most cases, on steep hills) from the nearest bus service on 15th Ave NW.

While Magnolia, due to its high income demograpics and low density, is unlikely to ever be a source of blockbuster ridership for Metro, the 24 proposed in the original Fall restructure concept had a real chance of performing much better. It provided a connection between Ballard and Magnolia, and it provided much more direct service to the only two areas of multifamily housing in Magnolia, on 34th Ave W at McGraw St (Magnolia Village) and Government Way, avoiding Route 24’s absurd zigzag.

I would argue that the correct response to the problem of underutilized service in Magnolia was not to kill night service, but to change the route structure, and give the modified service a chance to thrive, or at least cut back night service to just a handful of trips and see what happens. In choosing to axe night service, Metro is gratuitously cutting off a significant number of people from bus service altogether. It may be that this “dumb cut” garners less opposition from the neighborhood than a smart restructure, but what’s the point of having professional transit planners if Metro or the King County Council is just going to disregard their opinion and treat routing decisions as a popularity contest?

* The situation with the 14S is slightly complicated and leads us a little off-topic, but bears on this discussion because I subsequently assume the 14S will run later than the 27. Hull again:

The 14S is not losing span or frequency using a strict definition of the word.  The change to the 14S affects the segment between 31st Avenue S and S Hanford Street in the Mount Baker neighborhood.

The segment Hull is referring to is the vestigial tail of Route 14S, a classic example of a bus to nowhere, which should have been deleted in 2007 when the 14S was extended to connect with Link at Mount Baker TC, and was again slated for deletion in the early iterations of the September restructure. Despite that fact that this segment is only half a mile long, requires backtracking half a mile McClellan St on every single trip, and has pathetic ridership numbers, Metro just can’t bring itself to swing the axe. Instead:

The segment [will see] reduced frequency at night when operating a 30-minute headway the over the entire route requires an a additional coach. … [T]his means that after about 7:00 p.m. only buses coming out of service will serve the segment between 31st Avenue S and S Hanford Street on their way to the base. This means that this neighborhood gets hourly service until about 10:00 p.m.  [Then] a two hour or so window of no service then a cleanup trip about midnight. Given the low ridership along this segment, it made sense to improve the efficiency and reduce the cost of Route 14S at night.

My bet for Metro deleting this segment is around 2020.

99 Replies to “Metro to Cut Magnolia Night Service in September”