Since the spring, King County Metro has engaged in extensive outreach with bus riders in the Rainier Valley, looking for a better understanding of how riders are using the transit service which exists there now, and what barriers exist to greater use of that service. This outreach was ordered by the King County Council, as part of a political compromise to approve the eventual deletion of the cost-ineffective and geographically-redundant Route 42 in 2013. The public products of this outreach thus far have been seven posts on the official Metro Matters blog and a report, of which the report and several of the posts are full of great new information.

Let’s dig in to the report. There are three sections dedicated to public feedback, broken out by source: community organizations; community members (who attended in-person meetings organized by Metro); and online survey results. The first is easily the least interesting: it’s mostly a recitation of ACRS’s long-debunked arguments for how supposedly-irreplaceable the pre-2007 Route 42 was and is. Notably, according to the report, ACRS, after suggesting Metro’s survey questions were biased, conducted its own transportation survey in which a whopping 30% of surveyed riders thought the 42 was needed.

Rider feedback after the jump.

Metro’s summary of the in-person feedback runs from document page 8 to 11, and you should read that section in its entirety: it’s well written, and hard to condense further because it’s so full of information. The surveyed bus riders were almost totally unaware and untrusting of ORCA, and seemed confused about Link’s fare structure; they regarded Link as “impersonal” and relied on bus drivers as trip planners. In all other respects, the things they asked for were things that every other transit rider wants: buses to run more frequently (especially those which connect to Link), on schedule, serving safe and clean stops, driven by courteous drivers.

One statement which stood out to me was “Many rely on routes 3 and 4 and impressed upon us not to change those routes.” If someone had told me something to this effect, I’d have been fascinated to know where they were going on the 4 that they couldn’t go on the 3, 7, 8, 48 or 9X. Setting aside the possibility of transferring, there’s only one big destination I can think of, Swedish Cherry Hill, to which the 4 provides a unique connection in the Rainier Valley, and it doesn’t appear in Metro’s blog post on Southeast Seattle destinations. Axing underperforming service like the 42 and tail of the 4 is a guaranteed way to come up with money to pay for the improved service and facilities that these riders want. 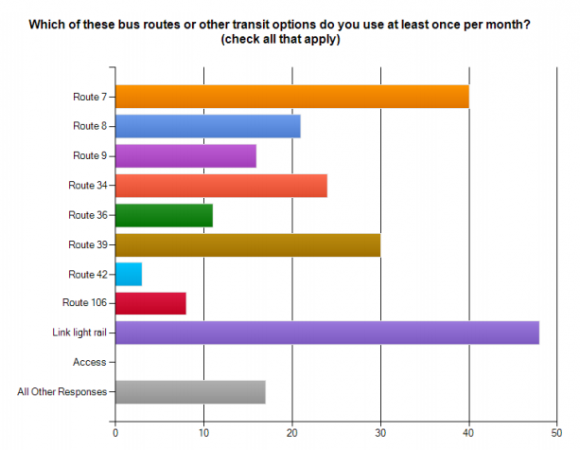 Next up, the results from Metro’s online survey of riders runs from document pages 13 to 17, and is similarly required reading. One thing worth noting about these results, however, is that they’re dramatically skewed towards riders in the rather more upscale east side of the Rainier Valley, around Seward Park Ave. I say this because, per the chart above, the reported usage of Routes 34 and 39, compared to Route 7 and Link, are way out of proportion to their annual ridership; e.g. Route 7 has about eight times as many riders than the 34 in 2010 annualized data, yet there are only twice as many 7 riders than 34 riders in this chart.

This doesn’t mean the data are irrelevant or invalid, but it is necessary to have this in mind to properly understand the results, and I’m surprised this isn’t called out in the report. My hunch is that if the concerns of 7 riders were weighted more in line with the 7’s ridership numbers, there would be less concern about parking near Link, and more about the 7’s horrible unreliability, lousy un-airconditioned coaches, and public order problems (on and off the bus). Also, feedback from 34 and 39 riders regarding the deletion of those routes in September was excluded (because the September restructure, including the details of the service to replace the 34 and 39, was not finalized when the survey was made) but I doubt Seward Park riders would have had much nice to say about the new Route 50, whose 30-minute midday headway isn’t adequate to make their Link-bus connections easy.

To me, at least, this report mostly illustrated how much in common the vast majority of transit-dependent riders in the survey have with all other riders, in what they want to see improved in Metro — except in one respect, namely a yawning knowledge gap regarding ORCA, between older riders with limited English skills and most others. Many of the community organizations whose input Metro solicited in this report are uniquely well placed to help address this issue, and doing so is probably more beneficial to everyone than flogging the dead horse that is Route 42.