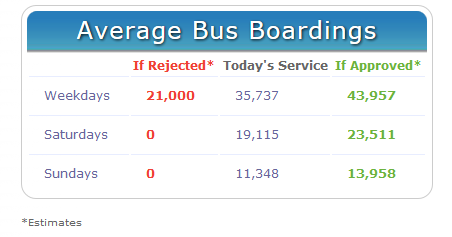 Sherwin’s reference to Pierce Transit’s Prop. 1 yesterday reminded me that we haven’t properly introduced the measure yet. As luck would have it, PT has an exceptional website that concisely lays out what the impact of a yes vote and a no vote would be. There are also open houses from September 5th through October 16th at various points in PT’s service area. It might be a good place to drag your not-quite-as-excited-about-transit friends.

Anyhow, PT’s reserves have just about run out, and if the tax rate remains as it currently is, there would be a 53% reduction in service hours by 2014, including the elimination of all weekend, evening, and holiday service. The routes that remained would of course become less frequent than they are today.

In contrast, increasing the sales tax rate from 0.6% to 0.9% would not only preserve current service, but allow a 23% increase over six years. It would also restore special event service.

The website provides further details on the cuts PT has already made to both their service and their administrative costs, as well as the concessions the union has made.

Metro and Community Transit are positioned to attract choice riders, but for PT it’s the basic level of social service that is under threat. On the other hand, it’s surprising how little 0.6% buys these days.