ST’s total predicted revenue through 2023 dropped another 5%, as predicted 3.4% revenue growth for last year turned out to be 2.2%. South King was hit the hardest.

Here’s a handy table summarizing how total projected revenue picture has evolved since our 2010 report:

The staff slide presentation identifies few risks to bond funding, but moderate risks to grants (thanks to the attitude of current congressional Republicans) and continued risks to tax receipts due to the still-fragile economy.

Unfortunately, the primary casualty of the revenue losses has been project reserves, so the plans aren’t terribly robust to further bad news. One option to close the gap is bonding. If the board decided to do this, it would bring the debt ratio above self-imposed agency policy, but still below many peer agencies. Other options are cutting system features, delaying completion, or going back to the legislature and voters for more money. However, at the moment there is no tangible impact on Sound Transit’s plans.

For the dreamers, though, this slide gives a little hope, below the jump: 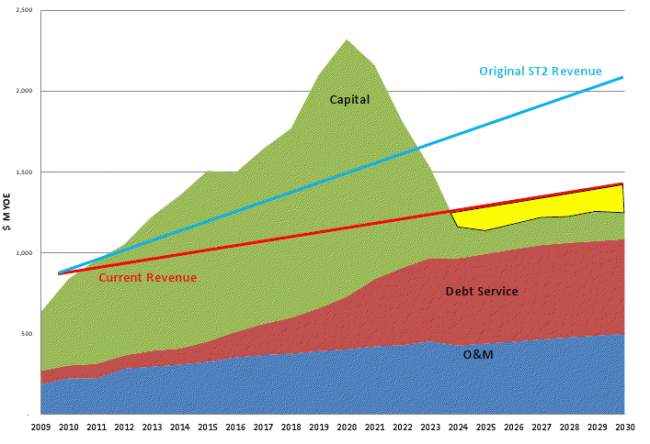 That yellow band is the cushion that Sound Transit still has — or, if you like, the first chunk of capital that can be used for new projects. $100m a year in 2020s dollars is not a lot in the scheme of things, but it’s something.