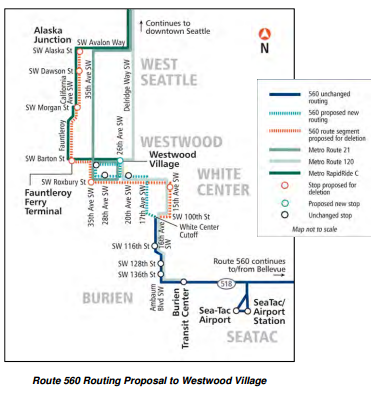 Last week, Sound Transit staff were kind enough to sit down with me and fill in some details on their recently released 2013 Draft Service Implementation Plan. Between the DSIP itself, which is a pretty substantial document, and the additional information from staff, I have quite a lot to write up, so I’ll cover the DSIP in three separate posts: this one on West Seattle, one on the I-5 corridor between Seattle and Everett (including discussion of a possible Olive Way freeway stop), and one on the rest of South King and the Eastside.

I’m starting with the West Seattle change, because its a simple change that serves to highlight both the strengths of Metro’s new West Seattle network, and some (easily fixable) problems in its implementation. The West Seattle component of the final Fall restructure was the component that was least watered-down from its original concept. The benefits are pretty obvious from looking at Oran’s frequent service maps from before and after the change: the tangle of infrequent and overlapping downtown routes has been replaced by simple frequent service patterns on the three primary corridors, all of which touch together at Westwood Village.

Maddeningly, the roll-out of this new network design was plagued by mostly-transient problems which were coincident, but unrelated: downtown operations were (inevitably) a mess due to the elimination of the Ride Free Area; many of the features which are supposed to make RapidRide an improvement over “ordinary” bus service — e.g. platform ORCA readers and real-time arrival signs — were (and in many cases still are) non-functional; peak-period overcrowding on the C Line caused tremendous inconvenience to riders, which took Metro some time to address through additional C Line and Route 55 trips. The legitimate public outrage from these problems overshadowed the mostly excellent work done by Metro in this area.

Finally, though, Sound Transit came along with this proposal in the DSIP, to provide a great illustration of how it’s possible to leverage connection-oriented networks such as this one, to provide significantly improved mobility at minimal cost. The DSIP describes the history of the 560 at length (p.p. 71), but the recent history is a follows. Until June of 2010, the 560 served Alaska Junction, Fauntleroy, White Center and Burien before heading to SeaTac airport, and points east, every 30 minutes through the day. Due to significant under-utilization, off-peak service north of Burien was first cut to hourly, then eliminated altogether.

Sound Transit now proposes to restore all-day service as far as Westwood Village, providing all three primary transit corridors in West Seattle a two-seat ride to the airport, with frequent connecting service, six days a week during the daytime on the 21 and 120, and seven days a week into the evening on the C Line. It provides this improved mobility at minimal additional cost over the current peak-only service; similarly, Metro’s West Seattle restructure was almost budget-neutral, with only a small injection of Transit Now money added to the C Line. Improvements such as this are impossible with a downtown-oriented, infrequent radial network. The word synergy is horribly overused, but it really does apply here — Sound Transit and Metro have created value for riders, as if from nothing.

There is a trade-off, of course — riders have to transfer; and here’s where Metro needs to improve. The 21 and 120 have published schedules which allow a rider to plan a fairly timely transfer to the 560, which will run every half-hour during most of the off-peak period. RapidRide doesn’t provide such a schedule, except late at night, when it drops below 15 minute headways; Metro claims that every 15 minutes is “so frequent you don’t need a schedule”. In reality, the headway where riders stop paying attention to schedules is about ten minutes, a level of service RapidRide provides only in the peaks.

Metro’s stated rationale for not publishing a schedule is operational ease of adding buses to address overcrowding or anticipated high demand, and the potential for (in future) using headway maintenance to keep even spacing between buses. In peak periods, where buses are operating near capacity, in moderate-to-severe traffic congestion downtown, at sub-ten minute headways, these reasons holds water (and Metro correctly exploited this flexibility last week, to add trips in the morning peak); but at 15 minute headways buses should be trying to stick to a fixed schedule, and the odds are nil that Metro will have to frequently adjust headways in West Seattle to address capacity problems off-peak.

There’s a very easy solution that provides both the flexibility Metro desires, and the off-peak predictability riders need. As with so many things, we can look to our Canadian neighbors to the north to see how transit should be done. Here’s an excerpt from the first bus schedule on the Translink website I happened to click on:

It’s also compact and simple to understand. There’s no good reason I can think of why Metro can’t publish schedules like this, not just for RapidRide, but for every route in the frequent-service network. Doing so would require an investment of staff time, but wouldn’t otherwise cost any significant amount of money, and it would allow riders to fully utilize the service they’re paying for, and make these valuable and important regional connections.

Returning to the DSIP itself, there are several opportunities to provide feedback for Sound Transit. Notably, there will be an open house on a bus tomorrow evening, in Westwood Village, in the zone where the 560 will lay over, if this change is adopted. You can also send in comments by emailing them to fastride@soundtransit.org.