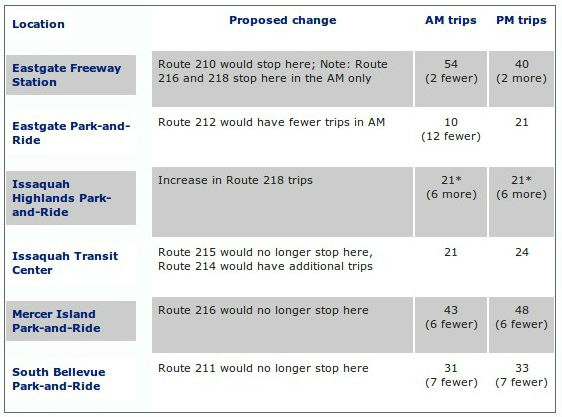 Lately, overcrowding has become chronic on Metro’s I-90 commuter routes; Metro responded a few months ago, by tweaking some routes to not stop at Eastgate, but promised further readjustments in the new year. That package of proposed changes is now out, and it’s a fairly minimal reshuffle that adds or subtracts a few trips to try to more closely match the number of trips with the level of demand.

While I’m not an expert on the I-90 corridor, I’m not particularly moved by the proposal. It seems to create confusing service patterns, like routes which make certain stops only at certain times of day; the greatest total number of trips added is six at Issaquah Highlands, which, if the corridor is currently overcrowded and growing above the rate of the overall system, is only going to provide a fairly short-term fix; and it does nothing to clear away the deadwood on this corridor. Mercer Island, in particular, is an mess of weird and under-performing service, like the 201 (three one-direction trips a day!), 202 and 203, which seems ripe for restructure. Similarly, routes 210 and 211 languish just above the bottom-quartile of Metro’s peak Eastside routes.

Metro seems to be making the smallest change possible to address immediate crowding issues, rather than what I’d like to see, which is more aggressively shifting service from poorly-performing routes to crowded routes, but it’s better than nothing. I know we have some readers who commute on I-90; what do you guys think?

90 Replies to “Metro Proposes I-90 Reshuffle”