Last month Community Transit produced the draft update to its six year Transit Development Plan. Their vision is an appealing one: prioritized transit corridors that travel through intensively used land. However, CT has (hopefully) completed a period of austerity that cut 37% of its service and over 200 employees, including the abolition of all Sunday service, at the cost of 3m annual boardings (off the 2008 peak of 12m).

The bad news is that their economic models predict revenue growth no faster than operating cost, meaning service levels will remain flat.* The near-term (2017)  goal is therefore both ambitious and limited – to recover the 2008 ridership high without any additional service, but through a 25% increase in productivity.

CT says it’s already at its most productive per revenue hour in its 36-year history. The plan doesn’t have a clear path to wring still more savings out of the system, as a lot of the least efficient service has already been cut. But the hope is that a combination of further emphasis on productivity in service allocation, more capacity through double-tall buses and parking spaces, and ever more intensive development along priority corridors will get the agency there.

On the other hand, there are revenue possibilities. 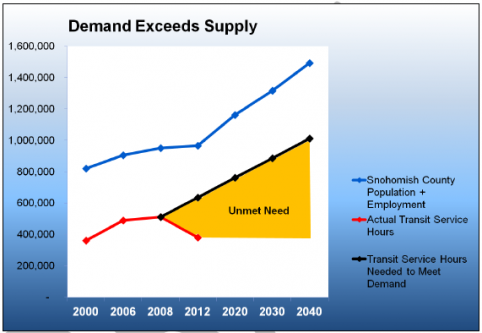 CT is looking for direct funding from both federal and state programs, in addition to more local taxing authority. Meanwhile a 25-cent fare increase takes effect Feb. 1st to bring CT’s farebox recovery up to 21%.

* Aside from some additional commuter runs from a federal Congestion Management and Air Quality (CMAQ) grant through 2015.

23 Replies to “CT Hopes to Fund its Future”