Some people like to talk and write about “greedy developers.” Greed is an attribute of people; there are definitely greedy real estate developers in Seattle. But there are also greedy bus drivers, greedy kindergarten teachers, and the greedy guy who makes 10 trips to the all you can eat sushi bar. Why one profession attracts greedy people and one does not is a sociological question, not an economic one. Consideration of how a piece of land becomes a financially viable project should dispel the notion that real estate development is a greed driven enterprise, or an easy way to exploit zoning and “laugh all the way to the bank.” 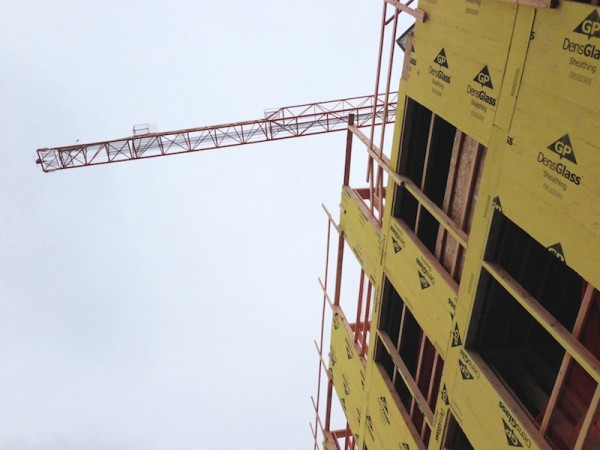 The business of real estate development is often characterized with a simple story of rich fat cats buying up land, building things on it, and then reaping massive profits by selling off what they build. However, like any business or organizational venture, real estate development is no sure thing. Business is like love; it’s about taking risks. One does not find Mr. or Ms. Right by sitting a home watching television; such a venture requires engagement and vulnerability.

Real estate development is about transmuting risk into profit; it requires taking a chance. The certainty levels of profit in real estate development are very low, and if they were higher there would be many more cranes than are on the horizon now. Projects that are coming out of the ground now came a long way, and it may have taken years of work and lots of money to get it done. Here’s a quick sketch of the factors affecting development.

Land acquisition—obviously every project needs land. Finding land that will work and this priced right is the first step. Private developers don’t have condemnation powers, so they take their chances with the market and with landowners looking to maximize their return. If the price is too high, nothing is going to happen. Assembling multiple parcels, for example, can take years and costs lots of money with little immediate benefit.

The costs of property acquisition are usually carried over time as a debt or are big one-time cash expenditures. Either way it takes a long time to get that money back, and even though there might be something on the site that generates revenue, there are still operating costs associated with running that function (parking, housing, retail etc.)

Market study (supply and demand)—a developer might have a pretty good sense of what’s possible on their land, the important question is “Does any one want to buy it?” In the real world, real estate development is driven by supply and demand. I can own prime real estate, but if nobody wants to buy what I want to build there, nobody makes money. Market studies are important tools to figuring out what people want and what they’re willing to pay for it. If there is no demand, then there won’t be a project.

Price—as I’ve pointed out before, once it’s determined that there is demand for what a developer wants to build she has to figure out what she can charge for her product. Often, the product is changed based on demand. Price for space, whether it is rentals, condos, or retail space, are set very early and are based on what is going on in the broader real estate market. A market study will help a developer figure out what kind of case they can make to a bank for construction and other loans. A developer has to ask, “If I build it will they come?” This better be an honest answer, because it shapes everything else that happens.

The banks—banks, contrary to popular mythology, are not freewheeling, drunken sailors of finance; they hate risk. Banks are the people who will loan you an umbrella when it’s not raining. A developer has to make a strong argument that the project that she is proposing has very little risk and a high potential for return. Want to try a green roof, or a passive building? The bank will need persuading that the rents will cover the extra expense and potential downsides, including permitting headaches and technical trouble. Banks like sure bets, which often means that they fund stuff that looks like everything else built before it. Hate cookie cutter buildings?; don’t blame developers and architects, blame banks.

Environmental—that sweet lot you bought might seem perfect for a mixed use project, but what about that sloping hill right near it? That could present a serious erosion problem. And, oops, it turns out there was a tank under ground when the site was a gas station. That’s going to cost some extra time and money. Local and state government require lots of due diligence to be sure that a site doesn’t have any serious environmental issues. In a big city, with lots of previous activities going on at a site over time, there can be lots of issues that come up. Those cost money to analyze and fix, well before a new project is even approved.

Zoning—even if the property is available, configured just right it’s got to have the right zoning. Obviously, developers try to buy land in the right zone, but after analyzing the site and the issues associated with it, including the financial risks, sometimes, the zoning needs to be changed. For example, if a developer finds that there is great demand for their product but the costs for building the project are high, she might want more units. Creating more units, even a few, could tip the scale for the bank, ensuring that rents or sales will cover the debt service on their loans. Maybe that steep slope adds costs that could make the project work if there were more, higher priced units.

Other problems—what happens if a general contractor goes out of business half way through construction? What if a sub contractor doesn’t work out, requiring that part of the project re-bid part of the work? What if prices on some of the key materials being used for the project suddenly spike, pushing up costs? All of these things and more can happen, affecting costs and the timing of the project. Funds can be set aside to cover these things, but delays and additional costs can turn what looked like a sure thing turn into a losing bet.

The neighborhood and politics—enter the big variable in Seattle development: neighborhoods and how they affect politics. There is an unfortunate relationship between neighborhood expectations and the reality a developer has deal with. Usually the more complicated or innovative a project, the more challenges the project faces—and the more approvals, exemptions, and changes to existing rules will be needed. That means everyone gets to weigh in on a project through the public process. Suddenly new variables get introduced: design, affordability, noise, use, and even the color of the paint or the windows all get questioned. Each one of these things can add costs to the project in addition to the extra time for public process.

Lease up and sale—and then, people have to show up. If, during the years it takes to deal with all the things I’ve listed already, the market shifts the developer could have a real problem. If rentals or sales are what is expected, prices might have to drop and that cuts into profits and can even put a developer out of businesses.

As with any business, sometimes developers strike gold and find a piece of property for a song, that’s easy to build on, has no issues, and creates a product that sells like hot cakes for a price that exceeds expectations. What’s wrong with that?

Real estate developers hardly ever end up “laughing all the way to the bank,” unless they’ve crawled their first having already spent their own money, accepted risks, and done lots of work to build a feasible project. Weekly paychecks aren’t the same thing as profit, and profit isn’t the same thing as greed. People make choices about how they make their money. Real estate developers make their money by taking risks; if people couldn’t make money building housing, then why would anyone do it? Would you pay your boss to come to work every day? Would you work for free?

67 Replies to “A Fistful of Contingencies: Developers, Risk, and Profit”