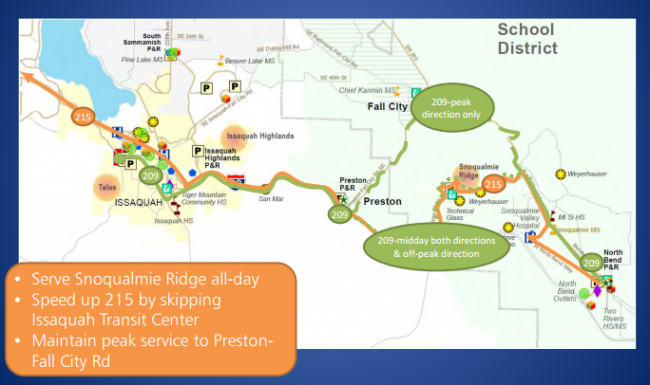 Last week, Metro presented a set of ideas for improving mobility in the Snoqualmie Valley area, ideas which could also save the agency a little money. You can read the slides here, but here’s the gist of it, for those of you who are already familiar with the existing network:

My only objection to this is that the peak-only route of the 209 should be renumbered (208 is available). Routes which share the same number, but go to different places, are an abomination which should be scoured from our transit system. If the bus you took to get to work (or wherever) won’t take you back home, your transit agency has failed you (and Metro is about to start failing a whole lot of Eastgate riders). With high-quality urban service, you shouldn’t have to memorize a schedule; with high-quality suburban or rural service, you’ll need the schedule, but you shouldn’t have to carry around a map. We should demand high quality in all Metro service.

Overall, the proposal seems to do a good job of moving service to where the people are, emphasizing connections at well-served suburban transit nodes, improving frequencies (such as they are) and providing alternative service types in places where fixed-route service is unworkable and pointless. By any measure, what happens in the Snoqualmie Valley isn’t going to make or break our transit system, but changes which improve mobility and save money are no-brainer optimizations that Metro should be seeking out, investigating and executing everywhere, relentlessly, as fast as humanly possible; and such opportunities are in essentially limitless supply with our current transit system.

I’m pleasantly surprised at the level of ambition demonstrated in the proposal. I hope it’s well received and implemented without much ado. You can email comments to Metro at haveasay@kingcounty.gov.

24 Replies to “Metro Presents Ideas for the Snoqualmie Valley”