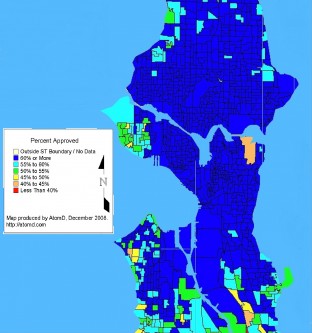 Earlier this month Tom Fucoloro at Seattle Bike Blog challanged those running against Mayor McGinn to offer a bold bike-friendly vision for Seattle:

Because right now, the nervous pack of challengers is playing it “safe” and letting McGinn run away with the label as the most progressive and inspiring candidate on transportation issues.

Is it just me or is this especially true for mass transit?   So far we’ve had Ed Murray saying the city can’t afford to expand Link, Burgess’s bold vision is to fix potholes, silence from Bruce Harrell (his last post in the transportation category is over 3 years old), and Peter Steinbrueck trying to reignite the Light Rail v Bus debate.

What gives?  Is it just too early to judge?  Is everyone so busy trying to be the anti-McGinn that they are punting on transit, and the 60%+ of voters that came out for ST2?

87 Replies to “Transit and the Mayor’s Race”