[Note: Moved up due to the all time-sensitive stuff this morning.] 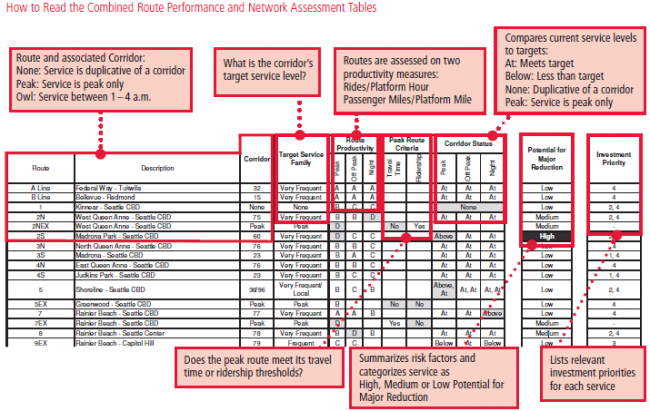 On Wednesday April 10th Metro met with planners and staff from the cities of King County to go over progress on the Strategic Plan Update and to better explain the recently released 2012 Service Guidelines Report and its implications.  Considering the 17% cut illustration Metro released with the Service Guidelines Report, that part of the agenda understandably dominated the meeting.  Metro also announced that starting this fall the publication of its Service Guidelines will move forward half a year.  Spring data will be released the following fall.

The majority of the meeting was spent on how to read the Service Guidelines Report.  It’s important to note that the route tables in the report look at two separate but related sets of factors:

The interplay between these two sets determine whether a route has a High, Medium, or Low potential for a major reduction in service.  There is a handy illustration on page 11 (reproduced above) of the Guidelines breaking the charts down.

Two points jumped out during the meeting.  The first was that the 17% cut scenario presented in Section 5 is only an illustration.  It is based off old data (spring 2012), includes only limited restructuring (if such a scenario were to happen there would be more consideration of a county-wide restructure) and it has not gone through any public process.   The second was just how massive a cuts scenario this would be.   It’s big enough that in the illustration only half of the hours came from the low productivity routes; the other half had to come from medium and high productivity ones.  Another way to look at it is that this would cut two thirds as many hours as last fall’s contentious reorganization only moved around (~25%).

While the 600,000 hours of cuts would occur in 150,000 hour increments, Metro has not decided if it would determine the specific cuts at the beginning of the process or after each set rolls out.  If new funding is not secured, the timeline would look something like:

38 Replies to “Context of the 2012 Metro Service Guidelines Report”