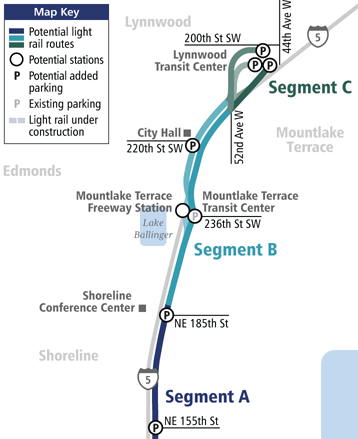 Shoreline started its Link station area planning with a public meeting on May 22nd at Shoreline City Hall. It was mostly an informational meeting, introducing the planners and the study areas. There was a wide variety of speakers, ranging from city staff to Sound Transit, the Puget Sound Regional Council, King County, a TOD consultant hired by the city, the activist group Futurewise, a seniors’ outreach group, and citizens’ groups. Roger Iwata from Sound Transit explained the rail line’s status along with Alicia McIntire, a Shoreline transportation planner. Shoreline land-use planners Miranda Redinger and Steve Szafran explained the station study areas and the process to reevaluate their zoning.

The primary question on many STBers minds is, “Where will the stations be?” There is still no definitive answer but the timeline and direction are clearer. ST will release a draft EIS this summer describing the tradeoffs between the alternatives, and will hold open houses in late July to solicit public comments on the draft. In the fall the ST board will make a decision on the stations and choose a Preferred Alternative. The final EIS will come out next year, and a federal “Record of Decision” filed in 2015.

The potential stations under consideration in Seattle and Shoreline are still 130th, 145th, 155th, and 185th. ST revealed that the following combinations are under consideration: (A) 145th + 185th, (B) 130th + 145th + 185th, or (C) 130th + 155th + 185th. 145th and 155th stations would definitely be elevated, while 130th and 185th may be either elevated or at-grade. “At-grade” here does not mean it would be subject to intersections and stoplights, but that it would be at the same level as I-5 and in the freeway’s right of way. All King County stations will be on the east side of I-5. That’s because there’s insufficent room in the median for a track or stanchions, and it would be very expensive to cross the freeway to the west side. Parking scenarios are 500 or 650 spaces at 145th, 500 spaces at 155th, and a garage plus 350-500 surface spaces at 185th. All of these would be in the freeway right of way as much as possible. There was no mention of parking at 130th. I don’t know if that means there wouldn’t be any or it’s outside Shoreline so it’s not their concern.

In Snohomish County the potential stations are Mountlake Terrace TC, 220th SW, and Lynnwood TC. The station sites and freeway alignment are more in flux here. One scenario has the Mountlake Terrace station at the transit center on the east side of the freeway, and remaining on the east side. Another scenario has the Mountlake Terrace station in the freeway median where the flyer station currently is, and crossing over to the west side for the 220th station. Some scenarios include the 220th station while others don’t. Three sites are under consideration for the Lynnwood station, but they’re all within a block or two of each other. The original choice is next to the freeway, while the alternatives are further north and west.

Shoreline’s timeline is to study two station areas now, at 185th and 145th. It’s starting with 185th first while it waits for ST to decide whether the southern station will be 145th or 155th. The study is currently soliciting comments on the study area boundaries. By September the city wants to identify potential land use changes (meaning upzones) around the stations. In December it will write a preferred alternative for land use, and adopt a final plan in June 2014. The study will also look at pedestrian and bicyle routes to the stations, at “complete streets” and traffic calming, at potential new job (employment) sites in the station areas, and other urbanist goodies to enable households to have fewer cars. The maps show they’re asking the right questions: 10-minute walk circles, 10-minute walk-on-streets diamonds, potential streets for cycle tracks, existing multifamily housing, and topographical barriers. The city is also in discussions with Metro about reorganizing the bus routes to be feeders to the train, which is a high priority for Shoreline.

One citizens’ group has already formed around its local station, the “185th Street Citizens Committee”. Another person announced the “Potential Citizens Committee for 145th and 155th Station”. That committee doesn’t exist yet but he’s trying to get it started.

Overall I’m glad that the 130th station and a three-station scenario is getting such serious consideration, and that Shoreline is asking the right questions about modifying its land use, and citizens’ groups are rallying around their local station rather than trying to push the line away. My main disappointment is that the ten-minute walk circles just barely reach Meridian Avenue (Aurora is another 10-12 minutes further), and the existing multifamily housing within the walk circles is infinitesimally small.