Much of the yesterday’s excitement was about what the city plans to do with unused money from the Spokane Street Viaduct project, a Bridging the Gap project which came in under budget, but there was another, similar announcement regarding a separate pot of transit-only BTG money:

Mayor Mike McGinn and King County Metro General Manager Kevin Desmond today announced the City of Seattle is buying more than 5,000 hours of added service per year through early 2016 on nine high ridership bus routes in Seattle. Using $750,000 in savings from the voter-approved Bridging the Gap Levy, the City of Seattle is able to help Metro increase evening and weekend frequency on high-ridership routes from 30 to 15 minutes or from 60 to 30 minutes.

“This one-time savings will help us make transit a better option for more people,” said McGinn. “But there isn’t any more money where that came from. I stand with mayors from across King County and Washington State to urge our legislature to pass the local transportation funding package we proposed to them in February, which includes revenue options that will help prevent a devastating 17% cut to Metro bus service.”

“It’s great to be able to add this service at a time of ridership growth,” Desmond said. “Every bit counts, but solutions are still needed to sustain service for all of Metro’s riders.” As temporary funding expires and reserves are exhausted, Metro faces a $75 million annual shortfall.

The routes benefiting from this temporary boost in service are the 5, 10, 21, 40, 41, 48, 49 and 120. Presumably the hope for when this money runs out in two years is either that Metro will be on a firmer financial footing, and able to fund these trips by itself, or that another BTG package will be authorized by Seattle voters. A separate, permanent 5,000 hour boost in service will come from Metro, paid for by Transit Now. As I understand it, each jurisdiction that has made significant investments in transit speed and reliability for a RapidRide route gets a bonus of that size, which they are allowed to spend on core routes of their choice. SDOT has evidently chosen to spend it on the E Line, which will need all the help it can get.

As the news release notes, the quantity of service hours purchased here is not enormous, certainly not compared to Metro’s structural budget shortfall. 5,000 is hours is not adequate to launch a new service, or a major expansion in frequency on an old service, but it’s enough to pay for a handful of new trips per day on a handful of routes. As part of the Urban Village Transit Network plan, SDOT has a policy goal of achieving, on weekdays, 18 hours of 30-minute service, and 12 hours of 15-minute service on UVTN routes; SDOT is using this money to fill gaps in the schedules of Seattle’s highest ridership routes, to bring them closer to that goal.

For more details, I spoke to Bill Bryant, SDOT’s Manager of Transit Programs, who had this to say:

The more often a bus runs, the more likely it is to be used by people who have other options, and the more convenient that bus is for all riders. This improvement package is designed to extend frequent service to run for more hours on some of the highest ridership routes in Seattle.

In some cases, when bus frequency drops from 15 to 30 or from 30 to 60 minutes in the late afternoon or evening, there are issues with overloaded buses, and SDOT expects this package to address some of those issues.

Below is a complete spreadsheet of proposed changes; it is preliminary, and subject to final costing work by Metro. 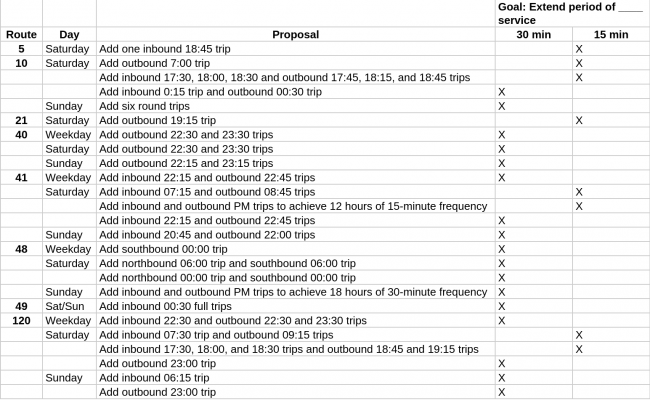 While the most notorious problem this will fix is night service on Route 40, perhaps a better example of how this will improve overall usability of the network is Route 10. The current schedule has a raft of irritating off-peak quirks: frequent service ends at 5:30 PM on Saturdays, rather than around 7 PM, as on the rest of the frequent transit network; Sunday morning schedules are hourly (!) until 9:30-10:00 AM; the late-night Saturday schedule is a mess, with two trips running within 15 minutes of each other, then a 45 minute gap. SDOT’s proposal would fix all of these, and in certain cases it’ll do so extremely cheaply, as all it may take is rescheduling a deadhead trip.

With this proposal, SDOT again demonstrates that they grasp what makes transit useful: frequency and span of service on high-performing core routes, throughout the city. As with all of the bus improvement work coming out of SDOT these days, my only complaint is that there isn’t more of it.