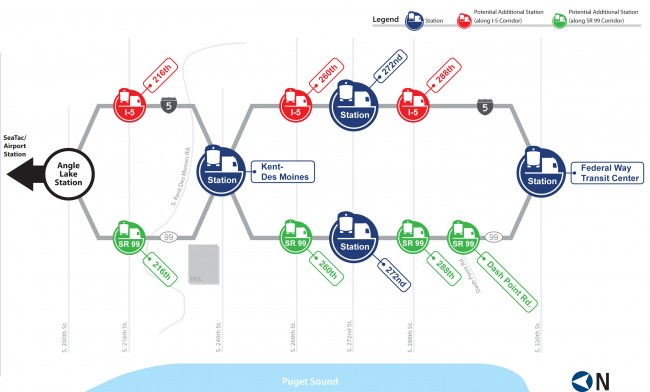 Sound Transit has come up with five route alternatives for the Federal Way Link extension and is taking public comments. I attended an open house Wednesday in Federal Way; there will be a second open house June 26th in Des Moines. In September the ST board will choose which alternatives to study in the EIS, and in early 2015 it will select a preferred alternative. The study area is from South 200th Street (Angle Lake station) to 320th (Federal Way Transit Center). Construction to 240th is funded in ST2. Construction further south would require additional funding, presumably in an ST3 vote. The alignments under consideration are:

Ridership (23,000 riders) and travel time (14-15 minutes) are the same for all alternatives. This allows us to calculate a Westlake – Federal Way travel time of 55 minutes. That’s based on the existing travel time from Westlake To SeaTac (38 minutes), plus two minutes to cover the gap to 200th. For comparison, the 577/578 express bus is 37 minutes, give or take traffic conditions on I-5 and in the transit tunnel.

My assessment is that SR 99 is better than I-5 due to the potential for TOD, direct transfers to RapidRide A, and proximity to Highline Community College. Its main hurdle is the $300 million cost over the cheapest I-5 alignment. Fortunately, travel time and ridership are not hurdles this time, unlike with the Lynnwood extension where the 99 alignment turned out worse in ST’s calculations.

To assess walkability, consider this: Going from west to east, first we have Highline Community College, which is on the west side of 99 at 240th. Then comes 99 itself, then 30th, then I-5. 30th is three blocks east of 99 at 216th, and one block east at 240th. North of the college, I-5 is 0.3 miles from 99 (7 minutes walk). South of the college, the distance between 99 and I-5 gradually widens, reaching 0.8 miles (16 minutes walk) at 320th. (Distances and walking times are based on Google Maps.) I don’t know much about the 30th Avenue alternative or why it’s being considered, but Google Street View shows a wide residential street lined with houses, apartments, motels, trailer parks, and car repair shops.

If you’d like to submit official comments to ST, go to the project page and click “Provide comments” on the right side. There’s a survey asking for feedback on the project’s need and goals, on which alignments to study, on which stations should be useful, and on what environmental factors to include in the EIS. The deadline is July 15th.