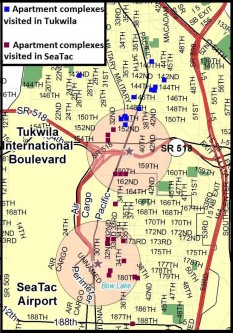 This March the Somali Community Services Coalition, with the PSRC’s Growing Transit Communities Partnership, released a paper titled Equity for All on the Housing and Transportation situation for East Africans in South King County.  It’s the result of 100 in-person surveys of East African families living in apartment complexes located near the Tukwila and SeaTac Link stations.

The housing picture is pretty bleak.  Most East African families are paying too much of their income to live in housing too small for their needs.  Also interviews with landlords and managers found that Link has increased the demand for these apartments resulting in lower availability and higher rents.

Transportation is more mixed.  While 40% of those surveyed used something other than driving alone for the majority of their trips a significant portion of the population (60%) has never used public transportation.  However it appears there is a pretty cheap way to decrease that number:

Increase oral outreach about public transit, including the light rail, buses, and ride programs:  Survey results suggest that many East Africans do not utilize public transportation.  Survey results also reveal that 48% of individuals learn about resources and services available in their community via word of mouth. More oral outreach and education must take place in order for the East African community to maximize their use of public transportation and other transportation resources, such as the Hyde Shuttle. This is especially important for seniors and individuals with disabilities, who qualify for transportation assistance but may not be benefiting from it.

While not mentioned in the report I have to wonder if the large family size is not a deterrent to transit usage as well.  If you need to get 5 or 6 people somewhere a used minivan may very well be more economical than transit.

Charts and the full transportation section excerpted below the fold: 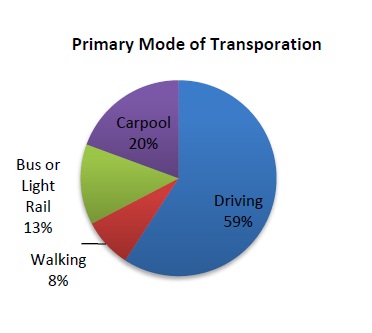 Of the families surveyed, 74% owned at least one vehicle and 79% of individuals surveyed reported that driving or carpooling was their primary mode of transportation, indicating low usage of public transit by members of the local East African community.

Though every survey respondent lived within walking distance to the light rail station, 80% said that they had “never used the light rail” or had only used it “once or twice.” Over half of these individuals said that they do not use the light rail because they prefer to drive instead. Survey results for bus use were similar. Of the 72% of individuals who had “never used the bus” or had only used it “once or twice,” 62% said that using the bus was unnecessary because they could drive wherever they needed to go. Other common reasons for not using public transit were that it is too time consuming or too confusing and intimidating.

However, there is indication that public transit is becoming more accessible to East Africans, especially the elderly or those who speak little or no English. One Somali elder shared, “more and more Somalis are beginning to use the bus and now there is generally at least one Somali speaker on every bus. Many people don’t understand how to pay, where to get off, and how to stop the bus but it is easy when you can ask somebody. There are several Somali bus drivers too, which is even better.”

Though many East Africans are not utilizing public transportation, easy access to the light rail and buses has drawn other individuals and families to apartment complexes located near the light rail stations in SeaTac and Tukwila. Every landlord SCSC surveyed reported an increase in demand for their apartments since the light rail was built and most reported keeping an occupancy rate of 98-100%. One landlord explained:

“The light rail was a big benefit to SeaTac and Tukwila. We have a great location, by the freeway and light rail station. I don’t have to advertise at all. Not online, not even outside. I used to put up a big sign and balloons and take them down every day but I don’t even do that anymore. It’s too much of a hassle. Now I have so many people coming in here every day looking for an apartment. I have been able to raise my deposit.”

Another landlord echoed, “There has been an increase in demand because residents enjoy the area and it is super close to the airport, 99, I-5, and public transportation. It is really easy to access wherever you need to go. People from out of town have been moving here because it is easy to get into downtown but it isn’t in the center of the city.”

Read the full study here.  It’s only 7 pages and well worth the time.