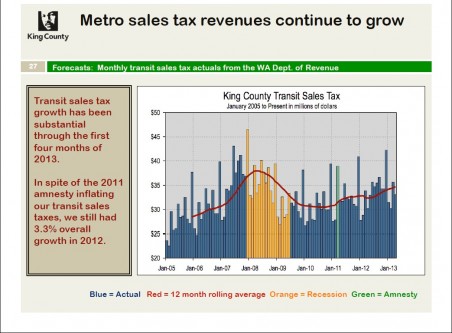 As promised last month, here is the July 2013 Economic and Revenue Forecast from the Office of Economic and Financial Analysis.  I am NOT an economist but it appears the news is quite good.  2013, 14, 15, and 16 Transit Sales Tax estimates have been revised upwards.  If I have done my math correctly that comes out to about $7.9m additional revenues in 2014, $6.0m in 2015 and $7.6m in 2016 (I don’t know how to estimate this year’s additional income).  Certainly not enough to cover Metro’s $60m a year shortfall, but it does mean there is the potential for a little less bone cutting.  Assuming of course I did my math correctly.