At the end of June, paper ticketbooks were no longer sold in King County. Metro is innovating in its approach to handling payments, slowly moving forward with a plan to implement cashless fares. The conceptual transit plan from March 2012 and an April 2012 plan to widen ORCA access both address cashless fares, with “The ultimate goal is to reduce or eliminate even off-board cash transactions…”

Metro’s Low Income Fare Options Advisory Committee is also moving forward, according to an excellent summary of their recommendations by Brent White.

The conceptual transit plan summarizes rider habits and backgrounds with data from a 2010 survey in order to provide some background: 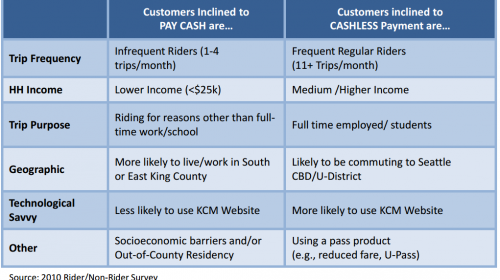 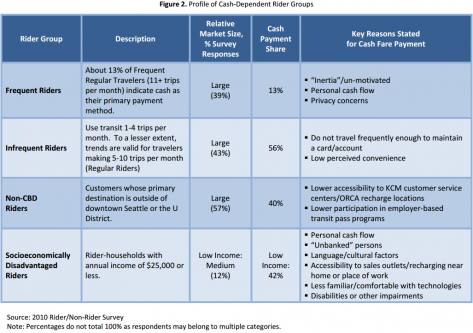 Accordingly, the plan lays out an agenda of marketing, promotion, and increased access to alternate forms of payment. Incentives include differing fare structures, waiving of fees for cashless payments, free transfers for cashless payment, expansion of ORCA vending locations to retail, and more. The plan also considers the socioeconomic diversity of the population Metro serves, with community partnerships and discount programs targeting specific areas. 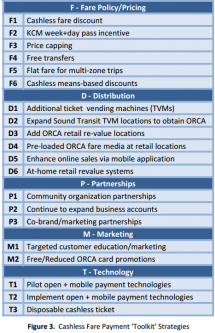 Rochelle Ogershok, public affairs coordinator for King County, told me about the most recent actions to implement the plan:

Metro obtained some portable devices that will allow us to issue Regional Reduced Fare Permit (RRFP)  and Youth cards on the spot (at senior centers, community centers, events etc.) helping us get ORCA cards in the hands of more customers in a more convenient and efficient way,” she said in an email. “The ORCA partner agencies also agreed to a change in business processes that allow retail outlets to sell ORCA cards (in addition to loading value), further improving access to ORCA cards throughout the region.

In addition, Metro hopes to install ticket vending machines in downtown Seattle to prevent cash payments from occurring on the actual bus and increase loading speed. Speed is one of the primary benefits of cashless fares, as anyone who has had to wait in line or had to fumble for exact change can appreciate. Near Field Communication (NFC) and other communication methods can also increase security (though there are also critics of their cost).

Ogershok told me the primary concerns are fare availability for those passengers who only happen to have cash, and whether Metro would continue to allow cash payments if the volume decreased to a level with manageable costs. And frankly, I can’t blame them for thinking hard about this, because there’s no easy solution, as it depends on how much and which people will use cash in the coming years.

Regarding the transit vending machines:

We are in a very early stage in the project, but at this point the operating concept for the TVMs includes both cash and credit/bank card payment,” Ogershok said in an email. “We will need a design that’s suitable for street-level use (e.g. size and ability to withstand wear and tear); cost effective to purchase and operate, and achieves key business objectives (speeding boarding).

Overall, Metro and Sound Transit could benefit from moving away from paper entirely. RapidRide in particular could use this improvement. Currently RapidRide operates under the same paper transfer/cash payments/ORCA options as a standard Metro route. However, the delay engendered by such slow forms of payment betrays the RapidRide name; shouldn’t a specifically speedy line have an updated form of payment?

In fact, papers from as long ago as 2010 make an even better argument for Metro (and Sound Transit by extension) to move away from proprietary payment systems entirely. Imagine being able to swipe your Visa or MasterCard, with no other intermediate card necessary. This would reduce or eliminate the costs of administering payment systems entirely. At the moment, Metro and Sound Transit are a ways away from that ideal, but encouraging cashless fares is the first step. Of course, there is a caveat, and that is un-banked riders, or those who somehow don’t have access to credit/debit cards.A report from the Smart Card Alliance makes some excellent points regarding this issue:

At this point, this seems like the correct approach to take. Cash isn’t going to simply disappear in the next few years. Giving riders the option to pay in paper (well, technically cotton) while slowly weaning it from buses is a middle-ground approach that should do well. And it’s needed; TriMet’s recent thanks-but-no-thanks to ORCA shows even similar agencies think it’s still a ways away from the ideal fare system.