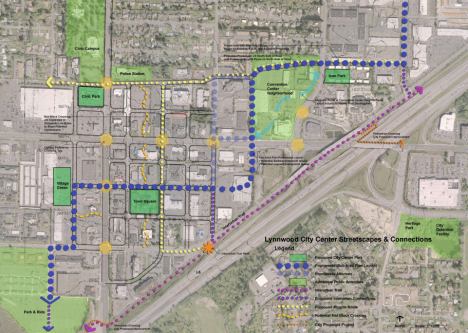 Lynnwood is revitalizing its city center, hoping to establish a true downtown anchored by the future Lynnwood Link Station.  Commuters might become Lynnwood city center customers, while expansion of apartments offers homes for those who want to live near the station. The Link station will sit just to the southwest of the red Priority 2 area (see below), but Lynnwood is pushing for improvements to existing street plans and transit access sooner rather than later. 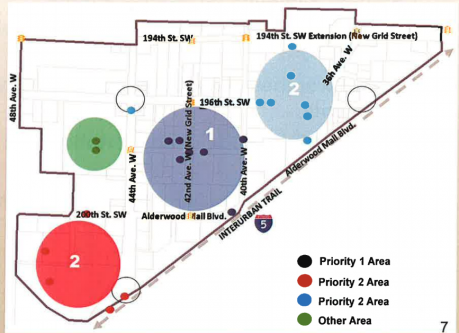 The Priority 1 blue circle contains darker dots indicating a primary focus on improving transportation in that street grid at those particular spots, though the color key is confusing.

There are four primary road and amenity projects in downtown:

1: Poplar Way Extension: A new bridge over I-5, conceived by the Lynnwood Access Study, would connect Poplar Way and 33rd Ave W. (north-south, and near 196th & I-5), and is labeled as second highest priority. It it also furthest along in development, with the second phase of final design and environmental documentation underway and funding ($2.9m in federal grants) acquired. The prioritization makes sense, as the new bridge would allow an alternate route over I-5.

Robert Victor, project manager of the extension, stated that the current work tasks mainly consist of engineering and permitting plans, along with environmental assessment. 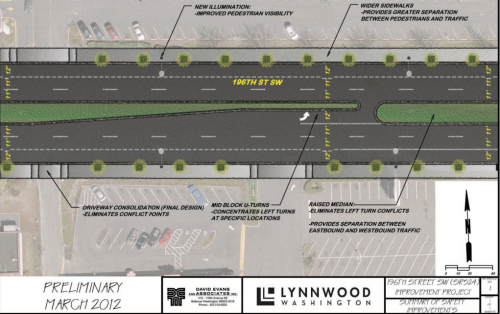 “We have been working with the Edmonds ferry to connect to the park and ride,” Lambert said. “Basically the BRT lanes could act as a trolley service. The findings of a recent study are that while the existing park and ride is good, there will be issues [with increased commuting] since 196th has a full interchange, but 44th has a half interchange.”

Lambert added in an email that there are changes to 196th with the widening and improvement project, but also planned are a new street at 42nd Ave W and the extension of 194th from 40th Ave. W. to 33rd Ave. W in the City Center.

“The curb lane acts as a transit lane…non-transit traffic has to turn right. It’s very similar to what Shoreline did, across Aurora. And it’s not just for turning transit, it just serves to get even more turning traffic across. We have more closely spaced turns, so I think we’ll get more usage than Shoreline.”

There’s more material and details in this prioritization project draft (used only for planning purposes, according to Lambert) from Nov. 2012, while final details are from here, and the development page online. 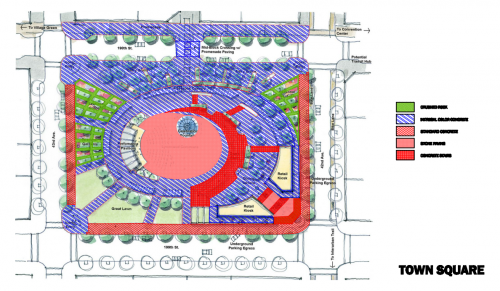 3. Town Square Park, which has a complete conceptual master plan, will serve as the “heart of Lynnwood’s downtown” and “a place for civic events”. It’ll cover 4.63 acres and is estimated to cost $15.47m. It’s as yet undecided whether Town Square will sit atop parking, or whether it will be developed at-grade in order to provide a park while leaving finer details for later build-out.

4. Civic and Billiards Parks, in the northeast and northwest areas of the city center. They also have a complete conceptual master plan. But as Lambert said, “The Town Square Park is the real focus.” The plan estimates that Civic will cost $4.9m and Billiards $2.1m.

The Transit Center, on which so much depends, will have an additional 500 parking spaces added by Sound Transit.

“There are not changes to zoning anticipated; the city center zones anticipate higher density from development and the proximity to increased transit provisions we hope will help facilitate that,” Lambert said in an email. The city downtown is currently zoned mixed-use, with varying heights depending on proximity to residential areas. For example, the maximum building height shall be 350 feet in the city center core, but from the centerline of 196th St. SW “north up to but not exceeding a distance of 360 feet, the maximum building height of any portion of a building shall be 240 feet.” There are more specifications and details here, beginning at section 8 on line 274.

In that same zoning code ordinance is a handy table at line 335 specifying floor-area ratio:

Parking minimums and ratios are also summarized below: 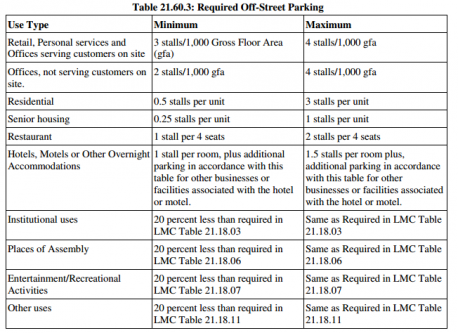 Other city center changes, from Lambert:

“…the Lynnwood City Center Senior Living development in the City Center core zone near the Convention Center received project design review approval early this month. This development will replace the existing 820 sf building on 1.8 acres with the balance of the site as surface parking with 308 new multi-family units with 8 stories total (2 floors of underground parking). This is the kind of catalyst private development that will begin to affect the downtown, increasing livability and bringing day/night uses into the City Center.”

There is a city Transportation Impact Fee exemption, up to $600,000 each, for the first three qualifying projects in the private-development, city-center-improvement vein, with the development summarized above as the first to qualify. A public hearing on July 29th will examine the exemption development agreement. It appears that all the development regulations support higher density mixed-use development, according to Lambert.

It appears that there are quite a few projects in motion, but the pace and improvements need to keep up with Link’s progress; the Draft Environmental Impact Statement regarding the Lynnwood Link extension is available and open for comment now.