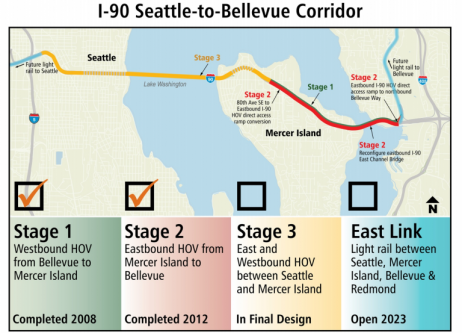 The I-90 project (R8A) team submitted its 60% design on May 8, 2013 for stage 3, which will establish HOV outside lanes in both directions from Mercer Island to Seattle. STB has previously covered precisely why R8A is important.

“R8A literally paves the way for East Link to move over to east side. Last year…we were facing a number of very tough questions, primarily safety concerns,” the project manager stated. “We hired a team of experts, whose key findings were the ventilation design is key, solid for 60%, very thorough and comprehensive at this stage.”

He added that given the nature of the project, it was important to verify coordination between cost estimation and scheduling and develop a detailed system commissioning plan. Independent constructability and cost review will hopefully finish in November, while the 90% design will finish by October.

R8A has obtained letters of concurrence on fire and life safety issues from the Federal Highway Administration and the Seattle and Mercer Island fire departments. However, the cost estimate has increased $6.5 million, or 3%. More breakdown and details are in the R8A Board Briefing; one important thing to note is currently the project has a $14.1 million shortfall. There was little to no reaction regarding the shortfall; this indicated that ST and WSDOT will simply commit additional funding beyond what’s already been committed.

The vagueness of the term “solid” was noted by several board members, so I followed up with Bruce Gray from Sound Transit public relations. He stated that basically the fire departments were satisfied with current preparations enough to issue a stamp of approval at this stage of the project.

For Mercer Island residents’ access to I-90, overlap between East Link’s construction and the completion of the HOV lanes is important. The board expressed concern, and was reassured that R8A and East Link will continue to coordinate schedules.

The U-Link Board Briefing restated the familiar figures; to briefly recap, it’s a 3.15 mile extension of Central Link with twin-bored tunnels, with a budget of $1.948 billion and a projected schedule of construction from 2009-2016, six months of system testing, and a service opening in fall 2016 (with a precise service milestone of September 24, 2016). 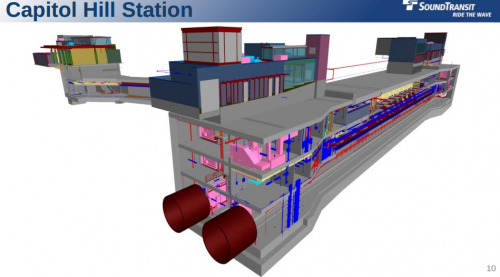 A brief financial snapshot was included, with $1.569 billion committed and $1.191 billion incurred in costs, as of July 2013. Awarded construction contracts exceed $909 million, currently. The estimated final cost is currently $107 million under the project budget, with an estimated 75% of the project completed thus far. The project schedule also contains 169 days of project-wide float. 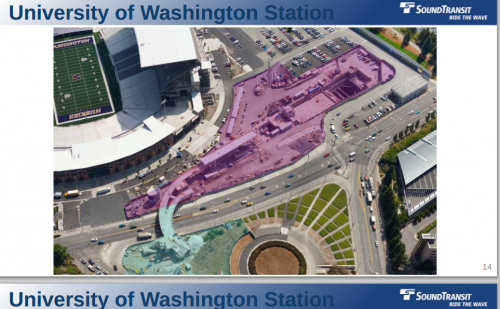 That 75% quoted above also applies to the curving track between Pine Street and the Capitol Hill Station, as well as the 2.1 miles between the CHS and Husky Stadium. According to the briefing, the Montlake pedestrian and bike bridge pictured in highlighted blue to the left is also 75% complete, while the pedestrian concourse underneath Broadway will begin construction in January 2014.

Staff also reported on installation of permanent track and signaling, and noted that U Link is right on schedule. Commenters have previously noted issues regarding headways in University Link; Gray assured me that next week a report will be released addressing the issue.

Various motions, all available here, were also discussed. Motion 63, a 3-year contract with EnviroIssues, Inc. for public involvement consultation, and motion 65, which increased contingency for the Northgate Link Extension to the tune of $6.25 million, were most notable, and also passed. Finally, the CEO report mainly dwelt on second quarter ridership numbers; an online copy of the report will hopefully be available soon.

36 Replies to “Sound Transit Board Meeting: I-90 HOV Lanes and ULink Progress”