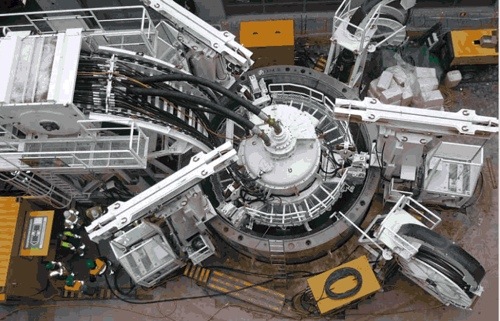 Last year King County tried out a new technology for the first time on US soil in Ballard. It’s called a Vertical Shaft Machine (VSM), and it’s a little like a Tunnel Boring Machine (TBM), but gravity makes the process easier. A TBM is a complicated machine that bores horizontally, pushing its way forward, carrying dirt out the side, and carrying concrete sections in. A VSM, however, can remove soil using a pumped water slurry. Also, concrete sections are simply added to the top, dropping down as the machine digs deeper. This results in a much simpler operation than a TBM, yet one that’s faster, safer, and requires a smaller footprint than traditional shaft construction. King County Project Representative Marty Noble says “In the 35 years I’ve been in this business I’ve never seen a shaft constructed in such difficult soil and ground water conditions and turn out as well as this one.” He says that caisson shafts are normally limited to 60-70 feet in depth but the VSM shaft was 150 deep and is “the best looking shaft I have ever seen.”

The Ballard shaft was only 9 meters wide, but could such a technology be used for building subway tunnels? The shaft built to reach the Beacon Hill station was 15 meters wide. Sebastian Berblinger of Herrenknecht, the maker of King County’s VSM, says that they currently build 16 meter wide VSM’s and have plans for up to 33 meter VSMs in the research and development stage. Sebastian tells me that a 16 meter wide VSM can generally build an 85 meter deep shaft, which would more than cover the depth we’d need for a Queen Anne station (Uptown has an elevation of around 43 meters, and the top of the Counterbalance is around 114 meters). And it could build it fast – up to 5 meters deep per work shift. VSMs have been used to build subway lines in Italy, Russia, and a high speed rail line in Spain.

Of course there would be other technical issues with a deep subway station such as elevator speed and capacity. But it’s encouraging that this new technology has the potential to make the physical depth of construction a smaller problem.