As Pierce Transit has slogged their way through successive rounds of service cuts, service frequencies have fallen far below those necessary to sustain the reasonably gridded, pulse-and-transfer based system they previously enjoyed prior to 2010. With mid-day frequencies at hourly on most routes and span of service ending in the early evening, the agency is rightly testing more ad hoc, targeted solutions, including seasonal routes such as the Gig Harbor Trolley, an expanded vanpool fleet, community circulators in East Pierce County, and now a new custom express route. This makes a certain amount of sense, as PT’s overcapitalized fleet affords them the ability to offer service to targeted constituencies willing to support it. 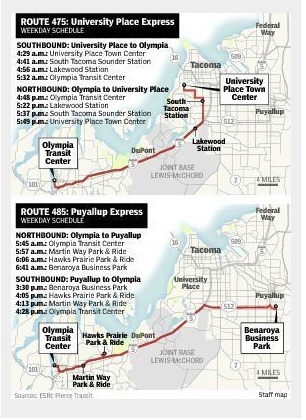 The institution of the new express Route 485 — to be the only fixed-route service on SR 512 since the demise of Sound Transit 585 — is being driven by the Western Institutional Review Board moving its office from West Olympia to the Benaroya Business Park near South Hill Mall in Puyallup. More of a professionally-driven, oversized vanpool than a fixed-route bus service, Route 485 will run from Olympia TC to South Hill with stops at Martin Way, Hawks Prairie, and then nonstop to the Benaroya Business Park. The once-a-day, 30-mile trip will take roughly an hour and have a custom fare of $3 each way. Surveys of the company’s employees indicate a likely daily ridership of 74, putting farebox recovery at 60%, nearly 4 times PT’s 16% farebox recovery elsewhere.

Somewhat strangely, the deadhead to Olympia will run in service as a separate Route 475. Beginning in University Place at 4:30am, the trip will provide a timed connection to the first Sounder train at South Tacoma, stop at Lakewood Station a full hour before the first Intercity Transit 609, then run nonstop to Olympia. In the afternoon, it will provide a 6th frequency during the 4:00pm hour between Olympia and Lakewood, meet the second Sounder train at South Tacoma, and terminate in University Place. The resistance to deadheading the route is admirable but puzzling considering the massive deadheading required for PT-operated Sound Transit routes, which in many cases exceed 100 deadhead miles per day for each round trip.

To say the least, in a general sense it’s hard to be excited by a once-a-day trip before sunrise to an exurban office park, but for Pierce County this idea has many promising applications. Employment centers that have multiple successful vanpools (particularly the 63,000+ employees at Joint Base Lewis McChord, where more than 60 vanpools operate) could, with sufficient local partnership, be scaled up to custom express service.