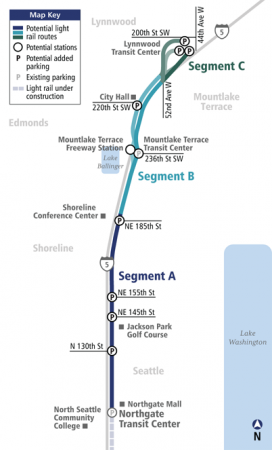 Sound Transit released a summary of public comments on the Lynnwood Link extension. The Board will vote November 21st on a preferred alignment and stations, assuming the staff finalize a recommendation next week.

The report does not include the text of the comments, but it has a count of those supporting or opposing particular segments or stations on page 8. Overall project support was 60 to 2. I wrote an article during the comment period supporting alternatives A5 (at-grade Northgate to Shoreline with stations at 130th, 145th, and 185th); B2A or B4A (east side Mountlake Terrace station with or without a 220th station); and C2 (Lynnwood station on west side of transit center). So how does that compare with the comments? 130th was the most-supported station, with 35 supporters. 145th and 155th tied for second, with 25 supporters each. The other stations each got 15 or less positive comments. Negative comments were highest for 145th (12); much fewer or zero for the other stations.

However, comments on the segments have a different distribution, so some people seem to have indirectly supported stations in their segment choices. In segment “A” (Northgate to Shoreline), alternative A1 got the most support (18 comments; at-grade 145th and 185th, no 130th station). My favorite A5 came in second (10), tying with A10 (like A5 but elevated). In segment “B” (Mountlake Terrace), segment B2A, one of my favorites, came in first (14 supporters; with 220th station). Opposition to any of the “A” and “B” alternatives was negligible.

Segment “C” (Lynnwood) got the most comments by far. This alignment is all up in the air given the outpouring of opposition to impacting Scriber Lake Park, and Lynnwood’s publishing its own alternative (C3M). My favorite alternative C1 (north side station) got 58 supporters and 21 opponents. C2 (west side station) got 3 supporters and 19 opponents. C3 (P&R station), the least walkable, got 73 supporters and 4 opponents. Additionally, a
petition opposing C1 and C2 got 1800 physical signatures and an unspecified number of electronic signatures, and a petition supporting C3 got 28 signatures.

Judging from the media reports at the time, most of the preference for C3 is to avoid impacting Scriber Lake Park, rather than specifically to be close to the P&R and freeway. Lynnwood’s preferred alternative puts the station on the east side of the transit center rather than next to the freeway, and would be closer to the bus bays. Lynnwood’s emerging downtown is expected to be mostly northeast of the station. C1 would be adjacent to this, while the other alternatives would add 2-4 blocks of walking. All alternatives would all be within walking distance of the park and the Interurban Trail.