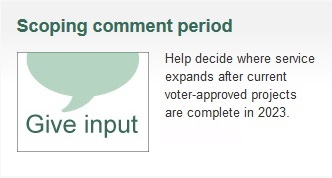 As Martin first mentioned last month, Sound Transit has been reaching out and asking for input on their Long Range Plan Update.  Today is the last day for that.

For an in-depth look at what this all about, Ben posted a great write up on the whole process following one of the Seattle Open Houses.

Basically, for ST3 and ST4 Sound Transit will pull projects from the vision laid out in this Long Range Plan.  If there is something you would like to see the agency do, let them know TODAY, so it can become a part of that vision.

At the very least take the 5 minute survey.