Sound Transit has announced that it will offer special Black Friday Sounder service, with 1 round trip from Everett and 3 round trips from Lakewood. The first trips from Lakewood and the lone trip from Everett will both arrive in Seattle about 90 minutes before the  day’s festivities begin with the 9am Macy’s Parade. Shoppers and families coming into Seattle on the North line will have about 9 hours Downtown, while those on the South line will have 7-hour and 9-hour options. In addition, Seattle residents visiting family in South King and Pierce County have a few reverse travel options as well. Here is the full schedule: 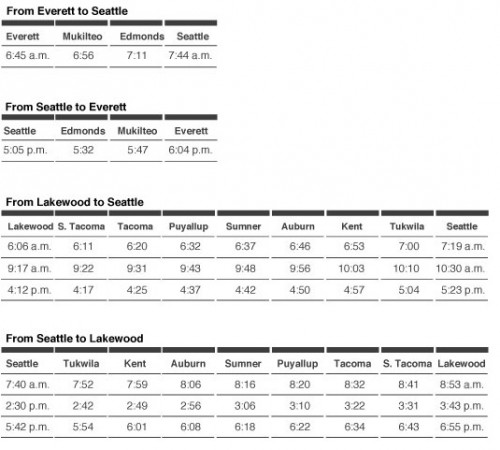 Extra Amtrak service between Seattle and Portland has been dramatically scaled back this year. Where previous years saw as many as 11 added trains, this year we’ll only see a single round trip on both Wednesday and Sunday, leaving Seattle at 12:30pm and with the return trip from Portland departing at 5:45pm.  This paring back is almost surely due to the withdrawal of federal support for state-supported corridors that became effective October 1 of this year. Many trains for the weekend have already sold out, so act quickly if you’d like to take the train this weekend.

Stay safe and enjoy the long weekend, everyone.