Following the negative reaction elicited by the state’s first conceptual designs for Tacoma’s Freighthouse Square — which would have demolished the westernmost half of the structure, WSDOT is starting over. In addition to the city trying to hire their own architect for the project, tomorrow and again next Thursday WSDOT will hold two public meetings to hear your ideas for station design.  More details and commentary below the fold. 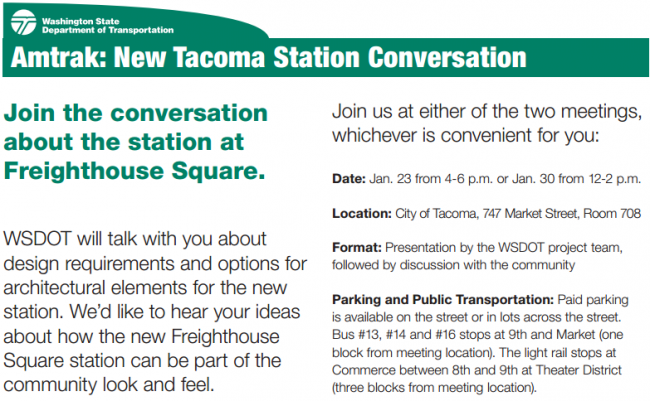 Freighthouse Square has long been an anomaly. While on the one hand it is chronically underused, aesthetically unappealing, and struggles to retain retail tenants, it has nonetheless served as one of the few regional rail stations in Washington where commerce is not only permitted but encouraged, including coffee shops, restaurants, and even a marijuana dispensary. Consolidation of Amtrak services into Freighthouse will bring the station up to 40 trains per day (26 Sounder, 14 Amtrak) and bring much-needed all-day activity to the area, likely helping the station sustain more of its commercial business.

Though in a perfect world we’d figure out a way to reactivate the gorgeous Union Station with new track and reversing train movements (like is done around the world — see places like Bradford Interchange), a fully realized Freighthouse Square is the next best thing. This is a great opportunity to impact the design process, and if you have the time and inclination to attend, please do so.