While Metro kept itself afloat through a combination of reserves, cutting nonessential services, and legislative authorization for a two-year, $20 vehicle license fee that expires this year, Community Transit went over the cliff in 2010 with a cumulative cut of 160,000 annual service hours, including all Sunday and Holiday service.

CT’s new draft Transit Development Plan (pdf) will use increasing tax revenue from the economic recovery to restore 73,000 annual service hours in increments through 2019, with the biggest chunk coming in 2015. CT will remain a shadow of its former self, even before considering the growth in Snohomish County in the intervening decade. 2014 is the first year that sales tax revenue will exceed 2007, in nominal dollars. Adjusted for the consumer price inflation — to say nothing of fuel and labor costs, the main drivers for a transit agency — CT is still 10% lower. 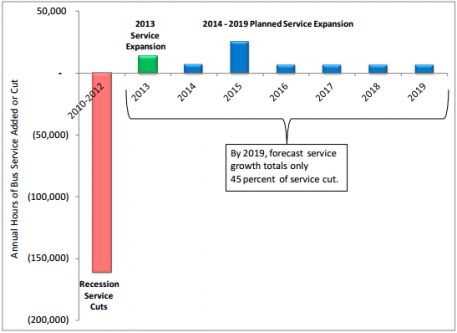 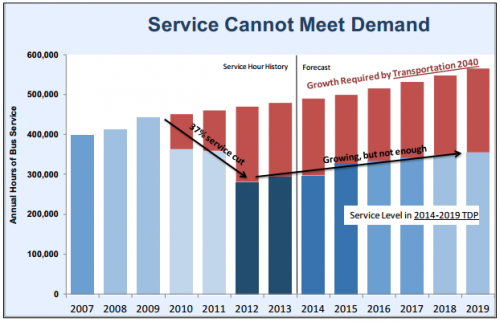 Although Metro is presumably experiencing similar trends, they only partially offset the various temporary measures that have preserved overall service levels and expire soon. Expect a full report on Metro’s financial state this week.

Details on CT’s proposed service additions are below the jump.

The September 2014 changes are relatively minor:

But in June 2015 changes choose from a menu of interesting options:

CT is also pushing ahead with planning for an (unfunded) second Swift BRT line from the Boeing plant to (as far as) Canyon Park, as well as renovation of several parking rides and a new Smokey Point Transit Center.

You can comment on CT’s Development Plan online through April 10th, or in person April 3rd.