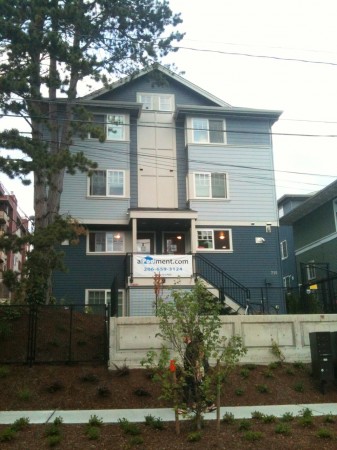 The Seattle Council is considering two amendments to the land use code today. The first will be before the full council at its 2pm meeting, and concerns small-lot housing. Public comment is allowed, and important details are still in play. The second is a meeting intended for public comment, before the Planning, Land Use, and Sustainability Committee, at 5:30pm. Both meetings are in Council Chambers in City Hall.

Small Lots. This is about clarifiying rules construction of new single-family homes in small lots in those neighborhoods, to end an existing moratorium. Mike O’Brien wrote a  good summary; as always, ex-STB writer Roger Valdez provides the perspective of someone trying to maximize the number of people that get to live in Seattle. Apparently Councilmember Tim Burgess is looking to amend the committee’s product in a way that would reduce housing supply, on the grounds that growth should occur (entirely?) in our urban villages ($). Construction on small lots seems like a fiscally positive way to create economical family housing by not forcing larger families to purchase a full-size lot. It is odd to worry that multifamily construction isn’t producing enough multi-bedroom units and then shut off an approach more likely to produce these. Moreover, people concerned with a wide range of socially positive outcomes should focus more on the net number of units a project creates and less on, well, everything else. Mr. Valdez’s post covers the details well. It appears that his group, Smart Growth Seattle, is content with the baseline legislation although it is by no means perfect.

Microhousing. Well-understood to be among the best examples of the market providing affordable housing without requiring any government spending or regulation, microhousing comes under fire for allowing relatively poor people to disturb the “character” of “established” neighborhoods, and because residents refuse to believe that people will choose to not own cars. The legislation would ban microhousing from single-family neighborhoods, impose costly design review on these projects, and introduce vehicle parking requirements. Once again, Roger Valdez says it all best, but this bill certainly indicates the Seattle City Council isn’t serious about creating affordable housing.

If only we could focus the energy, currently wasted on smiting Amazon employees and blocking Microsoft buses, to the points where the Seattle Council is actually strangling affordable housing by limiting it to the drip feed of publicly funded projects, we might be able to solve this problem.