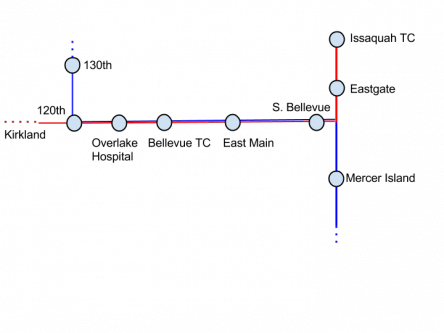 Recently, Sound Transit completed its Central and East High Capacity Transit Corridor Study (Part 1 & Part 2). Martin summarized the Issaquah-Kirkland options last week. Along with similar studies of South King County and Lynnwood to Everett, the Central and East studies presumably lay the groundwork for a future Sound Transit 3 ballot measure. It is just a study and not a formal proposal, but it would be easy to take this document and make a proposal out of it.

As an Issaquah resident, I’m excited to see a future where Light Rail is a part of the transportation mix. Our town is seeking “Regional Growth Center” status and has a new “Central Issaquah Plan” which approves projects up to 10 stories. Yet, this study’s Eastside options seemed to have missed the boat (or train!).

The study makes heavy use of options involving so-called Bus Rapid Transit – of the 8 options considered for Kirkland / Bellevue Issaquah, 5 are BRT. As readers of this blog know, BRT, at least as currently managed in the Puget Sound area, is frequently not Rapid. Also, Kirkland and Issaquah already have decent BRT options via the 554, 540 and 555/556 (which combined have > 3,600 boardings per day, almost half the ridership of the Sounder trains). It would seem unlikely that spending a bunch of money on new buses is going to make this service much better than it is already. Many of the proposals essentially turn the Eastside Rail Corridor into a dedicated bus lane, which will share some of the downsides mentioned later in this article.

If I live in Issaquah (population 33,000 over 11 square miles of land) or Kirkland (population 84,000 over 18 square miles), there are two places I’m likely to want to hop on a train to go to: Downtown Bellevue and Downtown Seattle. Yet, the HCT study evaluated train options that don’t go directly to either place. Although there are other places to go besides those two locations, but one could imagine that those two destination would be most attractive. Issaquah’s two light rail options take you to Overlake Hospital (tantalizingly close to the central business district of Bellevue, but off by 1/2 mile). Kirkland’s corridor studies take you to the U-District and to Overlake Hospital. You can transfer trains, but wouldn’t we want to make the most popular locations the easiest?

Likewise, the study makes significant use of the Eastside Rail Corridor. The ERC runs from Renton to Woodinville. It seems like the natural place to run a light rail line, as it is already municipally owned, has tracks and runs the length of the Eastside. But the ERC has major issues. To start with, there’s a major gap where the Wilburton Tunnel used to be which would require a bridge over 405. The Wilburton trestle was last rebuilt in 1943 and would certainly need to be replaced. Using the corridor for a Light Rail line may require a bunch of payments to various landowners, as has happened when the rail line was replaced by a walking path. Most importantly, the ERC runs where a freight line would run, and not necessarily where you would run a light rail line — it misses the cores of Downtown Bellevue, Renton and Bothell.

The proposal for the Issaquah Highlands, a community of 9,000 people on a plateau 5 miles away from the Issaquah Transit Center, suggests a light rail tunnel. Surely there are better and less expensive ways to climb the hill to the plateau! Much of the 5 miles could be run up the I-90 right of way, and the hill climb could run near the existing Highlands Dr. roadway, at a reduced cost and schedule risk when compared to a tunnel.

81 Replies to “A Better Light Rail for Kirkland and Issaquah”