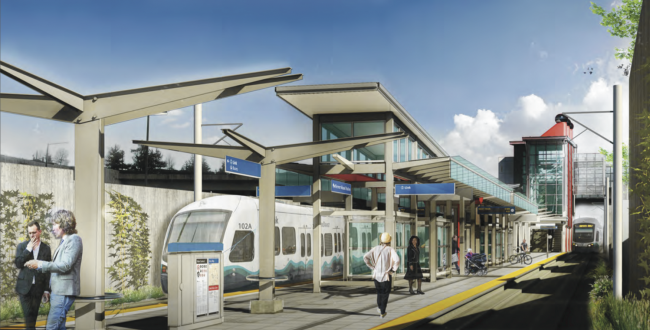 Last Thursday, Sound Transit held an open house to present the Mercer Island Station 60% design. In addition, there were several preliminary design options for integrating bus and rail at the station.

An animation of a Link train traveling from International District Station past Mercer Island was playing when I arrived. I didn’t hear many comments and questions as I moved around the room except for one notable exception: Several people expressed concerns about the loss of the express lanes. (For those who are unaware, SOV drivers are currently able to use the express lanes between the Mercer Island and Seattle.)

The station platform will be located between 80th Ave SE and 77th Ave SE where the current I-90 reversible express lanes are. The center platform will be accessible from both ends of the station and will be served by an up escalator, staircase, and elevator at each entrance. In addition, a Kiss & Ride area will be added at the 77th Ave SE entrance, and each entrance will provide seating, ticketing, and ORCA readers. There is even an area near the entrance marked “Future Vending”.

For those looking for bike parking, Mercer Island Park & Ride currently offers bike lockers that can be rented by the month and several well utilized bike racks. In addition to these existing spots, the station will include 8 new bike lockers, a secured bike cage for up to 50 bikes, and a bike rack area. I was told the bike rack area is designed to be convertible to another secured bike cage, should demand warrant it. In short, Mercer Island residents should have no shortage of places to stash a bike when Eastlink opens in 2023.

4 different options were presented for integrating bus and rail operations. These included various bus pick up and drop off locations, layover locations, and routing options. There were two Metro planners discussing these options. Interestingly, they were openly talking about potentially truncating all bus routes that currently travel across Mercer Island into Seattle. Not many people appeared to be paying attention to this information, even though, with increased frequencies, it could provide far better bus service throughout a large portion of the Eastside.

While there are still significant details to work out, especially with the Bus/Rail integration, the designs appeared to be a good example of multi-modal design, especially given the site constraints.
The Open House Boards, Staff Presentation, and details maps can be found here.