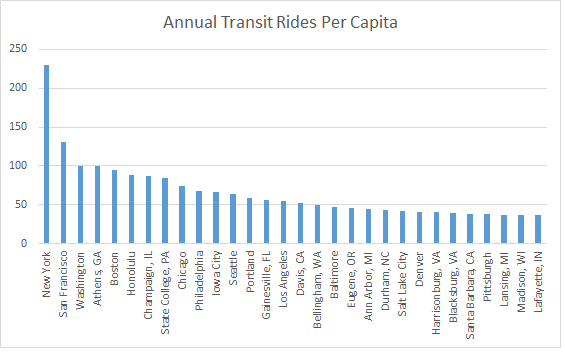 Listicles that rank cities according to ill-defined criteria are nearly worthless internet click bait, but as usual fivethirtyeight brings some rigor to the process:

The measure used is “unlinked trips,” which counts transfers during the same journey as separate trips. This figure can be converted to “trips per resident” by dividing unlinked trips in 2013 by 2012 population estimates from the American Community Survey (ACS), yielding a figure that’s neatly comparable among cities of varying sizes.

Note that these are metro areas, not single municipalities. As you might imagine, New York blows everything else away, much-maligned San Francisco/Oakland is second, and DC is third.  Then it’s a mix of transit cities and college towns. Atlantic City, NJ is last at #290, with 0.5 transit rides per person per year.

Here are the Washington State results with some interesting reference points thrown in:

The temptation here is to use metrics like these as a verdict on the worth of a transit system. But in reality, ridership statistics reflect a lot more than the decisions of transit agencies. Land use is arguably a larger input than anything involving the transit system. Due to the methodology here a transfer-oriented system will significantly outscore a one-seat-ride-based system independently of the number of people served. It’s also clear from the list that it helps to be a college town. Unlike population-weighted density, this statistic is very sensitive to boundaries: combine San Jose with San Francisco/Oakland, and that 2nd place finish is doomed. Finally, poverty also builds ridership, and can be a sign of either poor economic management (bad) or openness to immigrants (good). But it’s interesting that the mean Seattle area resident takes about one trip a week on transit.

I do like this metric better than “share of commutes using transit,” which puts a lot of emphasis on peak networks and not the all-day connectivity we argue for at STB.

26 Replies to “Transit Rides per Capita”