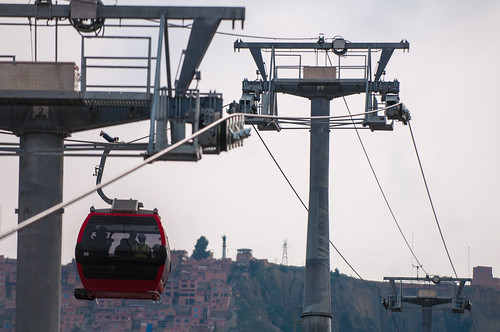 For every gondola idea I’ve posted here I’ve been careful not to plan a line in the same place where it would make sense to build rail. A subway is more permanent, faster*, and generally has much more capacity than gondolas. Yes, gondolas are potentially much cheaper, but cost shouldn’t trump good design if we can afford it. Because of this, I think gondolas are best run as feeder branches to a subway system, or on its own in areas that doesn’t make sense for rail.

This said, I would like to call your attention to the city of La Paz Bolivia, and its first gondola line, Línea Roja. In their opening month they served 1,000,000 passengers, or around 36,000 riders per day. This is well beyond Seattle’s Central Link’s opening numbers, and it took Link over 5 years to reach one million riders in a month. La Paz is on course to build a total of 8 lines.

Of course there are a dozen reasons this line isn’t comparable to Link, or anything we would build in Seattle. And it hasn’t changed my opinion that gondolas belong mainly as branch feeder lines if we can afford real grade-separated rail. But occasionally the issue of capacity comes up, and I think La Paz shows we don’t have to worry about it.

* depending on frequency and distance