[Note: Unlike most Page 2 posts, this is slightly edited for clarity.]

Fellow commenters on Seattle Transit Blog know my passion for more mass transit services to and from Paine Field.  I’ve even written a letter to the Everett Herald editor sharing my aspirations for a route serving – counterclockwise from the northwest corner – the Future of Flight, Historic Flight Foundation, Flying Heritage Collection and the Museum of Flight Restoration Center.

Now what and where are these marquee facilities?  See a Paine Field map also showing a few others not open to the public. The Future of Flight is part-museum, part-HQ for Boeing Tours, part-observatory and part-events center.   According to a PDF factsheet, it “draws approximately 200,000 visitors per year and generates an additional $3.5 million annually of tourism spending in Snohomish County.” Historic Flight Foundation is a flying museum at the end of Bernie Webber Drive that preserves aviation history from 1927 to 1957 with many historic aircraft. The Flying Heritage Collection is Paul G. Allen’s (mostly) flying collection of historic warbirds that range from WWI to a modern Mig-29.  There are also other artifacts like several ground vehicles, cutaway engines and disarmed rockets. Finally, the Museum of Flight Restoration Center restores aircraft for static display and is open to self-guided tours much of the year.

Everett Transit Route 12 serves the Future of Flight museum.*  It required a nice 0.8 mile hike – partially through a Boeing parking lot and partially on a nice trail.  The problem is that in inclement weather very few wish to hike almost a mile to visit the Future of Flight.  Please see pictures below from my trip on the 12: 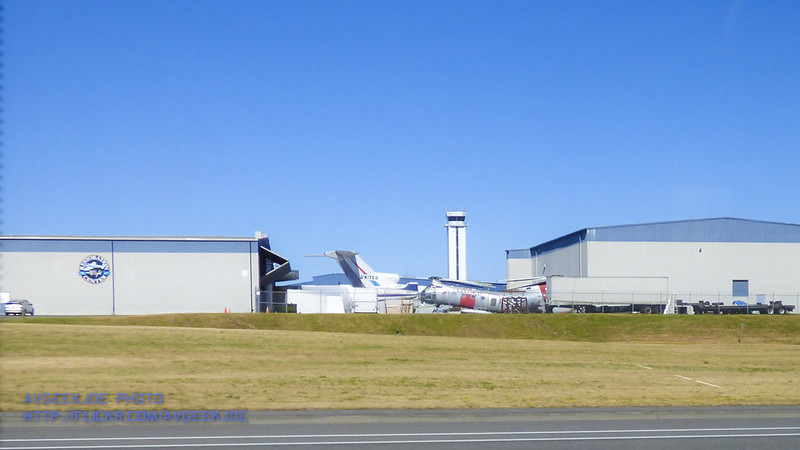 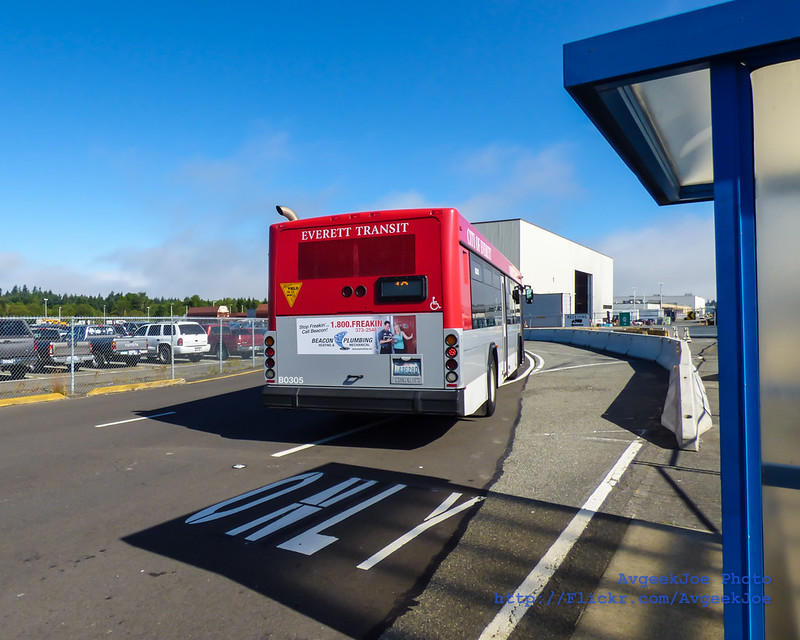 Getting off Everett Transit Route 12 in a big Boeing parking lot. 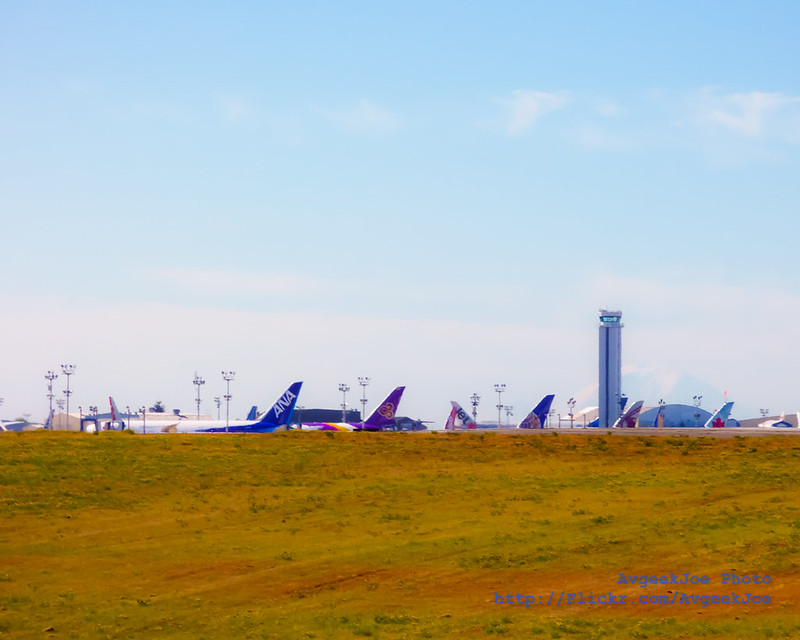 A view from my 0.8 mile hike from the nearest Everett Transit Route 12 bus stop to the Future of Flight

I asked local transit agencies what they could do about this situation. Community Transit couldn’t respond by press time except to refer me to Everett Transit. An Everett Transit spokesperson told me Everett Transit will take comment in late winter or early spring on route planning.  I’m going to start a petition for extending Everett Transit Route 12 that last 0.8 mile to get a bus stop at the Future of Flight Monday through Saturday on a trial basis with performance benchmarks.

There is is a much appreciated Community Transit bus stop at the foot of Bernie Webber Drive, the road that goes up to Historic Flight Foundation that serves several routes that link up with Swift (Bus Rapid Transit) to the south and both Sounder North and Washington State Ferries to the north. The Everett Herald reported a Community Transit Park & Ride is in the works for that location, which is sensible considering Historic Flight Foundation uses the proposed grassy area for special event parking anyway.

Ultimately, I argue that the international aviation geek community deserves some love and mutual cooperation from both Everett Transit & Community Transit.  In a perfect world where Paine Field did not fall between the Community Transit & Everett Transit service areas, having a Paine Field circular that would link to Swift (Bus Rapid Transit) would make economic sense because according to Paine Field’s official website, “Paine Field and its tenants have a $19.8 billion economic impact on the region and the state. Additionally, the Airport and the businesses utilizing the airfield provide $79 million in tax revenue to the local and state governments”.  I argue that from $79 million in tax revenue we could get some decent transit services to all of Paine Field’s tenants.

* You can also get out to the Museum of Flight Restoration Center by using Everett Transit Route 12 and disembarking at the 100TH ST SW & AIRPORT RD stop for a 0.23 mile walk.  To walk from the Museum of Flight Restoration Center to Flying Heritage Collection is a 1.5 mile, 30 minute hike through an industrial area.  Not exactly tourist friendly by almost any stretch of the imagination…

9 Replies to “North by Northwest 04: Transit at Paine Field”