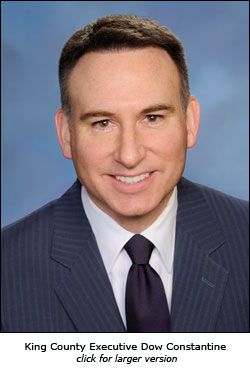 King County Executive Dow Constantine held a press conference Thursday to unveil details of how King County Metro will roll out its low-income fare program. The press conference followed the submission of the Final Report of the Low Income Fare Implementation Task Force.

The fare will be $1.50 per Metro trip, available only through ORCA, and will require the rider to go through a qualification process to demonstrate her/his income is at or below 200% of the federal poverty level. Requalification will happen every two years.

The qualification process won’t be cheap or easy for the county. But the application process and the low-income ORCA card will be free for the applicant. Metro will partner with Public Health – Seattle & King County to administer the qualification process. Public Health will work with other third-party agencies to set up more places riders can qualify. 45,000-100,000 riders are estimated to be eligible. The cost of the program — reduced fares plus administration — is expected to be $7-9 million a year.

The qualfication process will start up in February of 2015, with the new fare taking effect March 1, 2015. Kitsap Transit and King County Metro will honor each others’ low-income ORCA cards. (See page 2 of the linked document.)

Editor-in-Chief Martin Duke was one of the first to publicly call for this program. The council’s decision to create the Low Income Fare Options Advisory Committee came about partially in response to social equity concerns when the Ride Free Area was discontinued in 2012, and partially at the behest of an organizing campaign led by the Seattle Transit Riders’ Union.