When I last wrote to argue for express service on Amtrak Cascades, I used revenue by city pair because that was the best data to which I had access at the time. As I noted in the post, using city pair revenue as the basis for analysis was suboptimal, both because it unnecessarily privileged longer trips and also because it is vulnerable to distortions due to Cascades’ dynamic pricing. Ridership data would have been a more intuitive and human-focused metric, favoring “How many people travel between x and y every day?” as opposed to “How much revenue did trips between x and y generate?”.

Responding to the previous post, WSDOT graciously sent ridership data between all city pairs, allowing such a comparison to be made.

Even this data is a bit too abstract, however, so I converted it to daily ridership and created 4 ridership categories: High (green), Medium (yellow), Low (red), and Very Low (black): 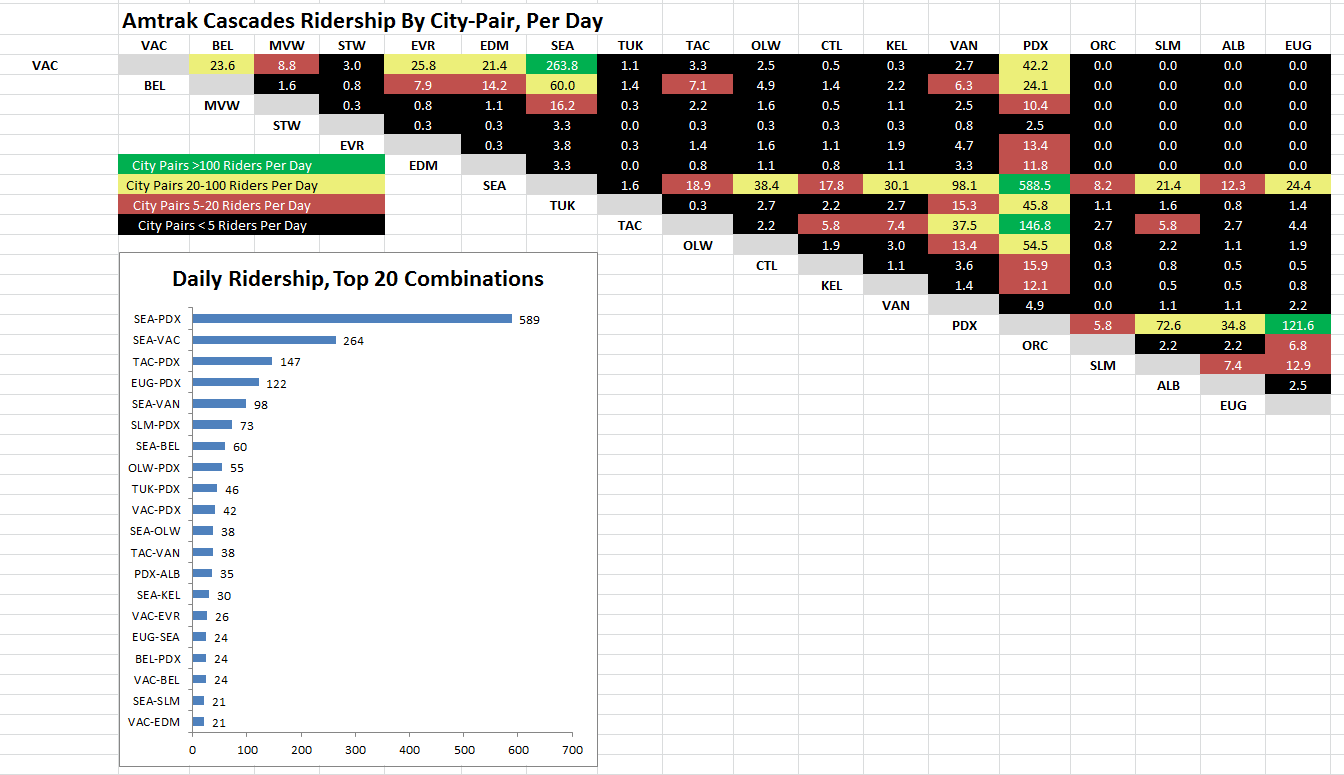 A few things stand out from this:

Considering this data as a whole, the supremacy of Seattle and Portland is undeniable, but I now think that the current service pattern of all-local service should persist until after the Point Defiance Bypass is complete. Stations such as Centralia may generate only 55 riders per day between all destinations, but there is unnecessary political risk and complexity in removing service only to potentially add it back 2 years later. Instead, I think that before we add 2 trains in 2017 we should have a robust discussion about how to optimize the service pattern to maximize ridership and revenue. Cascades’ biggest flaw isn’t its running time or even its low frequency, but rather its disregard for business travel or same day trips. It is still impossible to arrive in Seattle before noon or Portland before 11am, and same day trips are limited to 5-6 hours. But once Amtrak consolidates Tacoma service into Freighthouse Square, we have a painless opportunity to change that.

Imagine a new morning southbound train from Seattle to Portland leaving around 6:30am, stopping only in Tacoma and Olympia before arriving in Portland at 9:15am. Tukwila riders could transfer via Sounder at Tacoma (with added RailPlus ticketing), Kelso and Centralia riders would retain their local service one hour later, and Vancouver WA riders would already be taking C-Tran anyway.  Conversely, imagine a train leaving Portland for Seattle around 6:30am, but instead stopping only in Vancouver WA and Olympia, as Tacoma and Tukwila riders would already take Sounder.  After adding that limited-stop service, you could still add a 5th fully local service and meet the ARRA requirement for 2 additional roundtrips.

If implemented, everyone would get something, no one would lose anything, and all of a sudden both business and same day travel between Seattle and Portland would become a reality. What’s not to like?