As the County Council deliberates the 2015-2016 budget, one of the most important discussions is how to maintain Metro’s current level of bus service today without increasing the risk of even greater service cuts in the future when the next, inevitable recession hits our region. Here at Metro, our goal is to avoid past experiences in which overly optimistic revenue forecasts failed to materialize and, as a result, we were unable to deliver the services promised to the public.

The topic is hotly debated, including on this blog. We welcome public discussion and ideas for developing a long-term sustainable funding model for Metro. I read Mr. Whitehead’s recent analysis, and while it includes good observations it overlooks two important aspects: the inherent volatility of sales tax revenue, and the disconnect between the formal economic forecast that predicts uninterrupted growth and the well-established cycle that our region experiences a periodic recession.

This is an important and honest debate. We’ve taken major steps over six years to preserve service through innovation and continuous improvement.  The proposed 2015-2016 budget reflects these realized savings and finds new ways to preserve some additional service previously proposed for cuts. For the first time in preparing Metro’s budget, we analyzed historical impacts of mild to severe recessions. Through this analysis, it was determined that a prudent reserve target should be set at levels that would allow us to ride out something in between:  a moderate recession lasting three to four years. The reserve account is aptly named the Revenue Stabilization Reserve and was created by the County Council in 2011 to serve exactly this function of moderating and absorbing the unpredictable swings of our economy. Until now there was insufficient revenue to put into this fund.

Over the longer term, we also want to have a budget and finances that we believe are sustainable. Let’s remember, twice since 2000 Metro has relied on optimistic and ever-growing forecasts of future revenue only to have recessions (the dot-com recession of 2001-02 and the Great Recession of 2008-10) wipe out expected revenue as people stopped spending – causing Metro to scale back promises of added service. (See sales tax volatility chart – which shows recessions in the 1990s, early 2000s and 2008.) 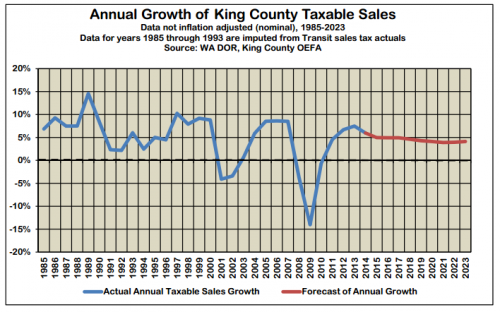 Under county code, Metro must use the independent Office of Economic and Financial Analysis forecast which in its most recent forecast shows uninterrupted sales tax increases from 2011-2024.  Such sustained growth would be without precedent, but Metro accepted these forecasts in the past: in 2000 after the 0.2 percent sales tax measure that partially replaced MVET, and in 2006 with the 0.1 percent sales tax for Transit Now.  The 2015-2016 budget the Executive submitted and that Whitehead refers to also must use this forecast. Therefore the near and mid-term financial balance sheet shows substantial cash in our Revenue Stabilization Reserve (aka rainy day fund).  Readers must remember this is a forecast; we have not collected this money, it exists only on paper.

So, we had to pose this question: how would our finances behave when the economy slows?  Given past history, and in view of the sales tax volatility, we believe it is prudent and sensible to see what amount of service we could afford and sustain if there is a moderate recession beginning in 2018. The Executive’s proposed budget provides for approximately 3.2 million service hours system-wide.  This assumes a net reduction of 400,000 hours, the first round of which was made in September 2014. Our economic sensitivity analysis shows that this level of overall service should withstand a moderate recession occurring at the end of the decade but only with the assumed rainy day fund levels in this budget proposal.

Metro’s two other major cash reserves (Capital and Revenue Fleet Replacement funds) are intended to ensure there is adequate money set aside in our multi-year financial plan to ensure we can keep our facilities, technology systems and fleet in a state of good repair—deferring maintenance is bad policy that ultimately results in higher costs in the long-run.  We have already diverted about $290 million from our capital and fleet reserves to preserve service over the past several years.  Our capital program now is largely limited to keeping our assets in a state of good repair, and if we are going to preserve existing service, Metro will also need to ensure there will be adequate funds to replace buses that are beyond their useful life of 14 years.

The County Council adopted modifications to the Metro Revenue Fleet Replacement Fund (RFRF) in 2011 to ensure for this outcome.   Reducing this fund now increases the risk that Metro would not have enough money to replace aged buses, especially during an economic downturn.  It’s pretty simple, if we don’t set aside adequate funds now to replace our fleet, we will be faced with either diverting money from our service budget or keeping old buses running even longer.  It’s a trade-off to be sure, but one we think we can avoid through prudent budgeting now.

All of these efforts to ensure for adequate reserves are intended to avoid the very turmoil Metro riders have been subjected to during dips in the economy.  When recessions strike, people stop spending, and the economy drops quickly and recovers slowly. We’ve seen how in good times sales tax can sometimes mean 5 to 10 percent annual growth followed by a quick 15 percent loss totaling hundreds of millions of dollars for vital bus service.  While it’s true that assuming no further recessions could result in an estimated $322 million in the rainy day fund in 2020, it’s equally true that a modest recession, say like the dot-com recession, could wipe out that entire amount illustrating the need to protect against such wide swings.  Similarly, by only cutting the 150,000 hours we did Sept. 27 and not putting sufficient funds into reserves – Metro could be forced into future stop-gap efforts to draw down other capital reserves or making service cuts as the recession affects our sales tax base.

A strong rainy day fund counters that volatility, which is the only dependable source we currently have available. We owe it to the public to plan wisely and spend tax dollars prudently. The question of reserves is a legitimate policy issue and open to honest debate and one our customers are watching carefully as they make life choices based on what transportation system we can commit to over the long haul.

King County Executive Dow Constantine recently said: Spending on service now at the risk of deeper cuts later is a significant policy choice that we should fully discuss. Given our record and spirit of collaboration, I am confident we can arrive at a solution that responsibly secures Metro’s present and future – so that when the economy changes, as we know it will, our riders won’t be left to wonder what’s going to happen to their bus.

The author is the General Manager of King County Metro.

48 Replies to “What is Financial Sustainability for Metro?”