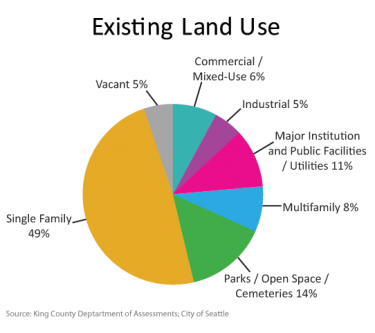 Recently, councilmember Sally Clark bravely broached the subject of reexamining the Urban Village Model. It should be pretty uncontroversial that after 20 years we would step back and assess a policy, but in the eyes of NIMBYs even talking about looking at the possibility of change in Single Family Zones is considered a capital offense.

The Urban Village Strategy was developed during the Norm Rice era to ‘protect’ Seattle from change by concentrating all growth in existing urban areas. On the surface the idea is pretty sound. Put people and resources where there are already people and resources, the opposite of sprawl.

A lot has changed in the last 20 years. Both in Seattle itself and with the country as a whole. More people want to live in Seattle and more people want to live in walkable urban neighborhoods. PSRC predicts 1,712,000 additional people to be living in our region by 2040; for political, economic, social, and ecological reasons we need the majority of those people to live in Seattle or nearby dense, urban, walkable communities. Currently only 8% of Seattle’s land is multifamily with an additional 6% being commercial and mixed use. This artificial scarcity raises the value (and thus costs) of developable land in these areas resulting in higher prices. When you permanently remove three quarters of the city’s land (49% of the land is Single Family – another 30% is Industrial, Public Facilities and Parks/Open Space) from the developable pool this means almost all growth and change is concentrated in small slivers of the city. Not only do these neighborhoods experience artificially high prices, but they also experience rapid change as growth is artificially concentrated there.

Density most definitely has its benefits, but spikes of incredible density in a sea of single family might not be the best solution. This is especially true if you are worried about the lack of 3 bedroom ‘family housing’ which is best supplied through town and row houses and not towers. If we want more family housing we need to open up more of the city to family housing, allowing these homes to be spread around and not artificially concentrated on a few blocks.

Or at least we should talk about it. We are a growing, vibrant, intellectual city, not a religious cult. No past policy should have the status of unquestionable dogma. Hopefully other leaders and officials won’t leave Sally Clark out in the cold, but will join her in saying that no policy is beyond discussion, even Urban Villages.