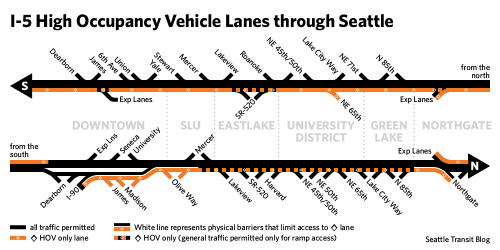 One of the quirks of I-5 is the lack of high-occupancy vehicle (HOV) lanes between I-90 and Northgate. Instead, there are reversible express lanes. This may have made sense in the 1950s, but it’s much less useful in today’s world of frequent two-way buses and dispersed urban centers.

Even the Washington State Department of Transportation (WSDOT) recognizes the problem. From their website:

As part of East Link, WSDOT is building two-way HOV lanes along the center of I-90. But the I-5 express lanes are not disappearing, and so unlike with I-90, there isn’t an imminent need to replace lost capacity. In addition, I-5’s frequent left exits make it harder to design a free-flowing HOV lane.

But hard doesn’t mean impossible. It can be done, and all it would take is a bit of paint, signage, and Jersey barriers.

Southbound, the existing left-side HOV lane would be extended along the missing span, between Northgate and the downtown express lane merge. Single-occupant vehicles (SOVs) would be allowed to enter the HOV lane to enter or exit the freeway at the Northgate express lane entrance, the left exit onto SR-520, and the left entrance from Mercer Street. (The 65th Street left entrance is already HOV-only.)

Northbound, between I-90 and Northgate, an HOV lane would be created on the right side of the freeway. The lane would start at the I-90/Dearborn northbound entrance ramp. Jersey barriers, starting along the ramp itself, would prevent vehicles from entering the HOV lane directly from the I-5 mainline, or vice versa. (A similar situation exists at the southbound I-5 entrance ramp at NE 65th Street.) This protected lane would continue northward, ending just a little bit north of the Mercer Street exit. HOV traffic would use the rightmost collector-distributor lane where it exists, and the rightmost mainline lane otherwise, protected by barriers in either case. As a consequence of this separation, the ramps at James Street, Madison Street, and Olive Way would be HOV-only. Conversely, vehicles in the HOV lane would not be able to access the left exits at Seneca Street or Mercer Street. After Mercer Street, the physical separation would end, to allow SOVs to use the right-side exits. After the N 85th Street exit, the HOV lane would again be physically separated, forcing HOV traffic to either exit at Northgate or to reenter the mainline. North of Northgate, the regular left-side HOV lane resumes.

All these physical barriers serve two purposes. First, they make it harder for SOVs to opportunistically use the HOV lanes when they think they won’t get caught. Second, they discourage drivers from rapidly crossing 4 lanes of traffic to get between the left-side HOV lanes south of I-90 (or north of Northgate) and the right-side HOV lanes in downtown Seattle.

Right-side lane restrictions aren’t always appropriate. For example, on SR-520, the long queues to enter I-405 made the right-side westbound HOV lanes nearly useless. What’s different about I-5 is the frequency and importance of its left-hand exits. The distance between I-90 (and the northbound express lane entrance) and Seneca Street is about 1 mile, and it’s just another mile to Mercer Street. Modern freeway design manuals suggest that exits should not be spaced more closely than a mile, and I-5 northbound covers that spacing with left-hand exits alone. Separating transit and emergency vehicles from the mounds of downtown traffic exiting the mainline highway on the left would be much more productive than separating them from the much smaller number of vehicles exiting on the right. In addition, once these buses leave downtown, they will eventually exit the freeway on the right, whether at SR-520 (e.g. the 545), or NE 45th Street (e.g. the 73), or 65th (e.g. the 522), or Northgate (e.g. the 41). A right-side northbound transit-only lane means that these buses can stay in one lane, rather than having to cross 4 lanes of high-speed traffic.

The benefits of this plan would extend beyond the freeway. Today, James Street is a parking lot during peak, and Madison Street and Olive Way aren’t much better. Without general-purpose I-5 ramps, these streets would have a lot less traffic, making them more useful as urban arterials (and for the HOVs that could still use these ramps). Instead, SOVs heading into downtown would exit northbound I-5 at Seneca Street, and SOVs leaving downtown would enter northbound I-5 at University Street. Like Mercer and N 85th (among others), University is cut off by I-5, making it useless for any purpose except entering the freeway, but perfectly suited for that role.

Finally, it’s worth noting that the James Street and Madison Street exits play a vital role for emergency response vehicles, which use them as a quick way to access First Hill’s hospitals. The proposed plan would guarantee that ambulances would never get stuck in traffic while trying to exit the freeway at these two ramps.

Undoubtedly, this plan isn’t perfect. The northbound lane would be be discontinuous with the existing left-side HOV lanes; buses that travel through downtown without stopping would have a difficult time making full use of both facilities. The loss of SOV access to James/Madison/Olive would make some car trips longer, and might create more traffic on local roads. But on the whole, I see these as minor problems. The bigger problem is the congestion that slows down buses between downtown and Northgate every single day. Even an imperfect workaround is far better than the status quo.