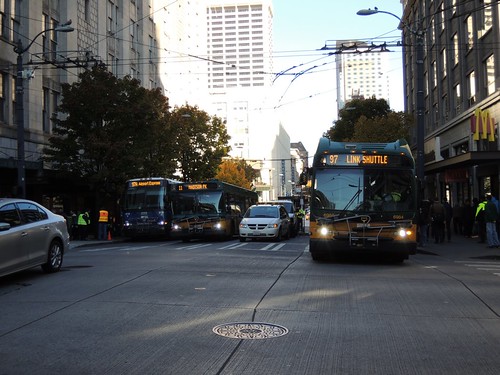 Metro’s now-defunct cut proposals included some restructures that are worth implementing on their own merits. They aren’t scheduled because the County Council never approved them, but at the same time the council didn’t reject them specifically — it just rejected the cuts as a whole. So Metro could still propose the restructures again. It should go ahead with the good changes, while leaving the bad ones in the dustbin.

Here are the cut proposals again:  Feb 2015 revision 2 (10 MB), original proposals (25 MB). Both are ZIP files containing PDFs. (These aren’t the entire cuts, just the routes I downloaded at the time.)

Queen Anne. The strongest of all, Route 2N is consolidated into the 13, and 4N is consolidated into 3N. Both 13 and 3N terminate at Seattle Pacific University. This gives two frequent routes on upper Queen Anne Avenue, the center of the urban village. It fixes the schizophrenic pattern of two half-hourly routes six blocks apart, and two routes that go downtown on opposite sides of the street. The losers would be those near 6th Ave W, but they would have a flat six-minute walk to the 13, and they’d still have the 29 peak hours. Metro has tried to do this change twice now, the first time in 2012, so Metro thinks it’s a strong alternative.

Central District and First Hill. The 4S would be consolidated into the 3S, and the 2S would move to Madison from Seneca. The 4S is redundant with other routes on the same street and nearby, and is slower than those other routes. The 3S serves an otherwise-unserved part of the Central District, so it’s a good route to make frequent. Moving the 2 to Madison would, along with the 12, give full-time frequent service on Madison. I’m not wedded on Madison vs Seneca, but I want both routes on the same street to make the corridor more usable. Metro has also tried to do this change twice now.

8/106. Metro’s last proposal for the 8 was to terminate it at Garfield High School. That would preserve the north part of MLK, which is a steep walk up to the 48, and keep the connection between Denny Way and Madison Valley. The 106 would replace the south half of the 8, turning north at Rainier Beach Station and going on MLK to Jackson Street and downtown. That would almost reinstate an old route, the 142, and give Rainier Valley better access to Renton, where many residents have relatives and friends. The gap between these routes — the part of the 8 that wouldn’t have service — is Jackson to Cherry, or 10 blocks. That’s the lowest-demand part of the route, but maybe Metro could extend another route to that area.

The Fremont restructure would switch the 5 to Dexter and the 26/28 to Aurora, making the latter all-day expresses. That would fill in evening/Sunday frequency on the 5, and connect upper Fremont to central Fremont. But it would make the already very slow 5 slower between Broadview and downtown. And it would put all-day expresses in single-family areas rather than in neigborhood centers. Still, if I lived on 15th Ave NW, I’d be glad for an all-day 28X if I can’t get a 15X.

The 70s restructure consolidates the 66/67/71/72/73X into a super 73, running like the 73X from downtown to 65th and then like the 66 to Northgate. The 71 becomes an east-west route on 65th from Roosevelt to NOAA. The 72 and 73 tails are replaced by all-day 372 and 373. The 70 adds Sunday service, so the 73 would be local only evenings. The bad part is the 71 being hourly: that would sabotage it because everyone would avoid it. But with more service hours it could become half-hourly, and the 70 full-time. Metro proposed through-routing the 70 with the 36; I don’t know if that’s worthwhile or not.

Other changes are bad and should not see the light of day.  The 60/107 restructure would terminate the 60 at Othello Station, making it a south Seattle only route. The 107 would take over part of its middle, going from Renton to Rainier Beach to 15th ave S to Mt Baker Station. That loses important connectivity between Beacon Hill, 12th Ave, and Broadway. Maybe the north-south part of the 60 should be separated from the east-west part, but only if something replaces the north-south part. In West Seattle, the 50 would skip the Junction and Alki and instead go down 35th Ave SW, not where most southeast Seattlites are going, and likewise most High Pointers want to go to the Junction or downtown, not to southeast Seattle. The rest of the West Seattle restructures look just as bad.

There are two important dates to keep in mind. June 2015 is when the Seattle enhancements start and the earliest a restructure could be ready. February 2016 is the start of University Link and Metro’s Capitol Hill restructure. Metro is taking ideas for Capitol Hill now, and will have a proposal in April. So I’d suggest leaving Capitol Hill for that process, and focusing on two or three of the other top changes for June.

Although key figures in city government assure STB that Prop 1 does not restrict Metro’s ability to restructure service, no doubt some people will claim that Prop 1 freezes all Seattle routes forever, regardless of how many people a service change can help. But if enough people tell Metro and the city council that they want consolidations and frequent corridors, it could focus Council attention on some of the restructures. People are awakening to the fact that consolidated frequent corridors are better for everyone’s overall mobility. But they’re not awakening fast enough or numerous enough or visible enough to counter the legacy-route advocates. That’s what we need to change to get good restructures approved.

80 Replies to “Save the Restructures!”