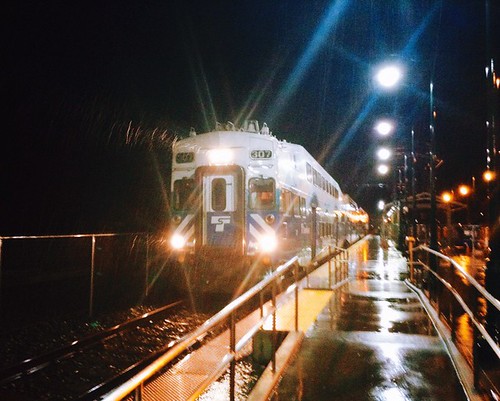 Unfortunately, mudslides continue to be an issue on our Sounder north line. On Wednesday evening, a slide came down in front of a Sounder train heading into Everett. Mud slid onto the tracks immediately in front of the train, which came to an emergency stop in the shallow mud and vegetation. There were no injuries or damage to the train equipment. The train waited about an hour while inspectors evaluated the conditions. Then the train proceeded slowly to Everett Station, pushing the debris off the tracks.

The slide knocked out north line service the rest of the week and we decided to cancel the Seahawks train that was scheduled to run this Sunday between Everett and Seattle. The forecast for new storms was making more slides likely and we didn’t want riders to be stranded trying to get back home. And then another slide hit this morning near Edmonds. The Sounder Seahawks trains on the south line between Lakewood and Seattle will run Sunday as planned.

We appreciate the patience of our riders when slides occur. Fortunately, during the shutdowns we are able to provide direct bus service from the train stations into Seattle and back.

The slide Wednesday was about a mile south of Everett and was the third in the Everett area this season. This part of the corridor is one of six project areas identified for the federally funded slope mitigation efforts underway by the state Department of Transportation and the BNSF Railway Company. Two slope mitigation projects near Edmonds and Mukilteo were completed in March and design on the remaining four is complete. The state DOT, BNSF and the City of Everett are discussing when to begin construction on the third project. Meanwhile, the state DOT is awaiting additional funding to begin construction on the remaining three projects.

The Seattle Times just posted a news story on the latest ongoing incident.  In it, they note Sound Transit is discussing the acute possibility of preemptively cancelling Sounder North services.  For a controversial, underperforming Sound Transit run it’s a lose-lose situation.  However, the greater loss would always be a Sounder train in Puget Sound for as King County Executive Dow Constantine aptly put it:

For those STB Readers like Mayor Jennifer Gregerson of Mukilteo that would like to have input – the next Sound Transit Board Meeting is December 18, 2014, 1:30 pm – 4:00 pm, Union Station, Ruth Fisher Boardroom, 401 S. Jackson St., Seattle, WA.  You can also e-mail the Sound Transit Board at emailtheboard-AT-soundtransit-DOT-org and EmailAllBoardMembers-AT-soundtransit-DOT-org regarding King County Exec Dow Constantine’s efforts on Sounder North safety, which is probably best since “Public comment is permitted only on items that are on the Board/Committee meeting agenda for final action, unless the Chair announces that comments will be taken on other items” according to the Sound Transit website.

PROGRAMMING NOTE: Expect a full editorial on this to drop late Saturday evening.  Let’s just say since Wednesday’s slide was at a slope to get maintenance next year, I’ll be making some firm comments as they’ll also be my comment letter to Sound Transit.  I was going to do one on airports & land use, but that isn’t so timely now…