There are a lot of opinions about what Sound Transit should do in Snohomish County, and (in our comment threads) precious few of those opinions actually come from there. To rectify that, I chatted with Sound Transit Boardmember, and Everett Councilmember, Paul Roberts for his perspective of what is desirable and feasible in that subarea. This is Part 1 of 2. (Part II)

Mr. Roberts is a self-described “recovering planner” who has served in numerous transportation and environmental advisory positions, and almost two decades as Director of Everett’s Department of Planning and Community Development, before “failing at retirement” by doing some consulting and serving in elected office.

Thanks for taking the time to chat. What drew you to the Sound Transit Board?

I’m very drawn to infrastructure. I’ve been long involved in transportation planning, including the Governor’s Connecting Washington Task Force. My roots are deep in this stuff. But also, I look forward into the future and see the bigger arc of this urban area. In lots of other urban areas like ours across the nation and globe, transit capacity is something they’ve developed or are trying to develop. A lot of people wish we’d done this earlier, but we didn’t; we’re here. Last but not least, I chair the Puget Sound Clean Air Agency and a lot of my technical background is in environmental planning. I can’t think of anything more significant to mitigate greenhouse gas emissions than building systems to give people alternatives to driving.

What do you think is the right vision for high-capacity transit in Snohomish County beyond Sound Transit 2? Why? 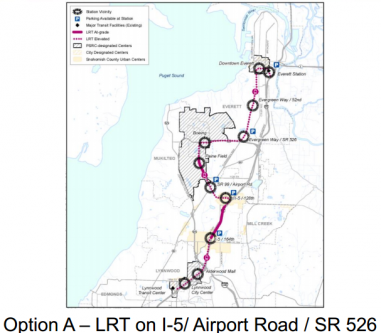 I’ve been on record for a long time as favoring Light Rail via I-5 to Paine Field (Option A), which I call the “Southwest Everett Industrial Area.” That’s an important distinction. We often talk about Paine Field, which is a big piece. But the zoning and infrastructure capacity of this area is roughly 100,000 jobs. Today there are about 55,000 manufacturing jobs. Boeing is of course the biggest, but there are over 200 companies there, and not all of them are aerospace.

This is the largest manufacturing center in the state, the economic driver of the state. It has a higher economic output than Seatac. It’s not about Boeing, but it’s about manufacturing capacity. If we are going to build a system, we have to build it to connect the job base. To do otherwise would be foolish.

How would any other nation build this system? Would they build one that did not connect their primary manufacturing capacity? I think the answer is no. I don’t think the Sound Transit study [which showed the same ridership for Paine Field and SR-99 alignments] reflected the job capacity of Southwest Everett. The real growth capacity is at Southwest Everett, not I-5. [On I-5] you get nothing that drives ridership in the future.

Lastly, we’ve already talked about integration of the Operations and Maintenance Facility in Southwest Everett. It should be integrated into the system to be cost-effective.

What are you hearing from constituents and stakeholders?

Up here, there is a strong recognition that these connections are important. There have been huge investments made in infrastructure to support this manufacturing base, which is of statewide significance. It’s designated a regional jobs center by PSRC.

Comments from the public have been pretty uniform. “You need to go to Paine Field, and if you don’t do that, why did you not do that?” We have a group here named SCIT (Snohomish County Citizens for Improved Transportation). It’s a sampling of private and public sector, but mainly private. It’s tied to the Economic Alliance up here. It’s big business, small business, transportation providers. When you read stuff in the paper and bloggers who respond to it, they say “why would you build a system and not go there?”

I’ve been hearing very strongly from the voices that say, “connect the jobs center. Connect where we live to where we work.” That’s been just overwhelming. I’m hearing a few folks say “We don’t really want to spend any money, so [I-5] is the cheapest option.” They’re not thinking in terms of ridership or job connections. But it’s two or three or four to one.

There are also people who don’t want to build a system. They don’t want to spend any money. It’s kind of an anti-government element. But the opinion leaders in this community, after a big split on ST2 –ST2 was close in Everett itself –some of the folks who might have been lukewarm, have warmed up significantly, especially in the last year, as they confront commute times that now routinely exceed 90 minutes. And as we look at Southwest Everett as a job center, we see the need for a commute system that works in both directions.

The CEO of the Economic Alliance, Troy McClellan, testified before Sound Transit. Troy has spoken many times about the problems attracting business investment, particularly international business investment, and they look around and say “how do you get here?” The answer is “by car or bus,” and their jaws drop. These companies from Germany and Italy and France and Japan and China are looking at this and saying, “really?” We already know, anecdotally, that’s a problem for us.

One criticism of service to Paine Field is that industrial workplaces are heavily shift-oriented, which makes them a poor candidate for frequent, all-day, high-capacity service. Why not run buses that require less capital investment?

I challenge the premise of your question. It’s not just a shift movement. While the Boeing shifts do drive significant peaks, it may not in the future, the jobs in the future are not just Boeing-centric, and other high-tech and energy industries are already there. It’s the Gretzky quote: “you need to skate to where the puck will be, not to where it is.”

This is the time where we get to say, “are we going to be a region,” or something more balkanized? It’s time to be a region, to connect the basic dots where the jobs are.

As for BRT, we’re pretty proud of the job we’ve done integrating Community, Everett, and Sound Transit on our corridors. We’ve had BRT running along SR99 for 6 years, from Everett to Shoreline, that’s been very successful. It’s not either/or; you have to have an integrated system to make it work. But the reason that BRT will not work as the only system is that the ridership is a little different.  I ride these buses enough to know that they’re operating in a lane capacity that isn’t getting any better. I don’t think you can do it just with BRT or just with fixed-guideway systems.

Obviously, lack of transit lane capacity is a conscious decision by highway and road planners, which could change at low fiscal cost.

You can make that argument. I think it is not compelling to imply that you could do all this work as BRT. I don’t think it holds in terms of traffic patterns, ridership, or future capacity. That doesn’t mean there aren’t things you can do to make those systems work better.

Going to HOV-3 has some unintended consequences that make it challenging. It’s a fair discussion and subject for more analysis. There are certainly things you can do to use pavement more efficiently. But what would that do to the overall commute? It’s hard for me to think of a more geographically constrained region; other regions, like Portland, Denver, and Washington, DC, have all struggled with these questions. I believe in stealing good ideas from everyone else. No one has resolved it to the satisfaction of everyone.

There are things we can do with bus priority. But they are not arguments for not building a fixed-guideway spine. It’s time to think as a region. To build basic infrastructure we need. But it won’t replace having to serve that spine with other forms of infrastructure to move people and goods.

Even if there are 100,000 jobs near Paine Field, they’re not going to all be within the walkshed of two or three Link stations. Do the dispersal of those jobs, and the relative unwalkability of many industrial campuses, give you pause about running trains there?

If fixed guideway was the only thing you provided, you couldn’t serve it effectively at all. It has to interface with a circulation process within the job center. I imagine it might also provide a closer connection to Mukilteo and even Edmonds as well, which I-5 couldn’t do at all. The real issue is how you integrate the system with other pieces.

The feeder systems are not enhanced by going to I-5, because those systems would be entangled in the same transportation trouble there. That’s an expensive proposition, and wasn’t a subject of the study.

Tomorrow: Land Use, North Sounder, Parking, and how to pay for it all.