King County’s media relations launched a full-court press to publicize the launch of their new Trip Planner app last week. Many people found it a surprising misallocation of resources given the underlying data problems. But how good is the app?

To this user of OneBusAway for his real-time data and Google Maps for his trip planning, the interface is (for the most part) pretty good, not noticeably better or worse than the alternatives. It adds some functions that don’t have a good mobile alternative. But the application is still hamstrung by a back end with deep technical flaws.

1) Trip Planner. Google Maps starts with a map, and there are a few additional taps to bring out transit and call up any time rather than right now. Trip Planner takes you right to the appropriate screen with Start, End, and time inputs. However — and this is crucial — it is much worse than Google at taking a random place name (e.g., “Facebook”) and turning it into a usable location. And only some of the screens replace internal route numbers (Link is the “599”) with their commonly known names. 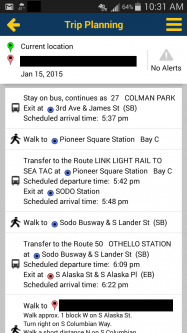 What about the algorithm? The regional trip planning algorithm has longstanding, well-documented problems with nonsensical results, and my spot checking suggests that hasn’t changed. To get a taste of it, I asked Trip Planner to plan my evening commute from Lower Queen Anne to just west of the Columbia City Link station. Any sentient human would take any of a series of buses downtown and transfer to Link the rest of the way. Google Maps actually passed this little mini-Turing Test.

Trip Planner’s result encouraged me to say on the 33/27 and switch to the 8. This is because the path that involved Link is slower, and shown at right.

Getting off Link and switching to the 50 is crazy, but after checking the default Trip Planner settings, my home is actually more than the default 0.40 mile maximum walk from the Station. The settings force me to transfer to a bus anyway, so these results are at least understandable. 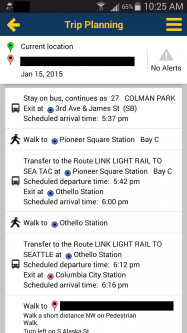 I tried again with a larger permitted walk. It again preferred the “faster” all-bus option, and the reasons are, uh, less encouraging (and depicted at left). Whatever algorithm it is that expects me to take Link from downtown to Othello, get out, and then backtrack one stop to Columbia City deserves to go to the scrap heap.

2) Route Schedules. This is what you need that you may not currently have. Metro’s existing schedule web pages are not mobile-friendly. The Transit App also does this in a somewhat different, but intuitive way.

The app is also tailored to show two different timepoints in column form, which makes it very easy to see your options. Bravo.

3) Next Departures. This is the direct competition for OneBusAway, and some of the interface differences are a matter of taste. Trip Planner brings up a list of nearby stops without forcing you to load a slow map, which has its advantages. It also has the ability to easily display arrivals for a time in the future, which is pretty nifty if you know you’re 10 minutes away from a stop.

On the other hand, there’s no way to filter routes, and as far as I can tell there’s no way to use the map to jump to stops that aren’t in your immediate vicinity. And this is built on the same flawed data feed as OBA, so various accuracy problems persist.

Trip Planner also doesn’t integrate Uber and Pronto like the TransitApp does, which makes little difference to me but may for others. TransitApp’s intriguing interface does a better job of integrating trip planning and real-time functions for people with less system knowledge and more focus on the right now.

I can see a case where a few minor improvements might make this better than OBA, but there even fewer changes necessary to make OBA the perfect real-time app. For now, I’m sticking with OneBusAway.

4) Alerts. This part of the app feels most incomplete; it just launches a browser instance pointing to Metro’s alerts page, which is unfriendly even on a desktop. I don’t understand why the Metro webpage can’t link each route page to the alerts specific to that route.

Trip Planner is a decent app that could become a great one. If you’re trying to reduce your home screen clutter then this is a single app that could do that for you, although in many respects it’s inferior to alternatives. Personally, I’m going to keep it handy to look up schedules, but it won’t change my habits for trip planning or real-time information.

38 Replies to “A Review of the New Trip Planner App”