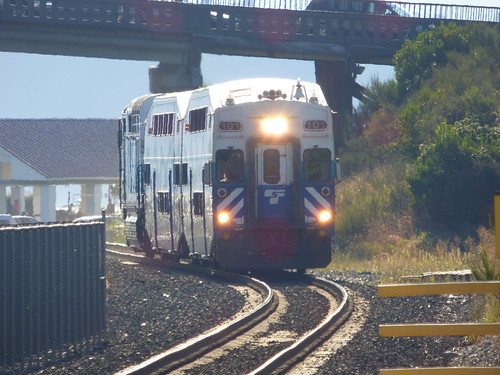 My Sounder Northline Photo From A Drier, Safer Time…

The most important slide is Slide #5, where in the slide notes of the original PowerPoint, it’s noted:

Our new protocol to determine if North Sounder service should be operated following heavy rainfall involves the following actions:

1.Sound Transit staff examines the data published by the USGS on a daily basis that charts the 3 and 15-day cumulative precipitation threshold, rainfall intensity/duration threshold, and a soil saturation index to determine the likelihood of a slide.

3.If the slide probability appears high, Sound Transit managers and senior management staff after conferring with BNSF and other partner agencies, determine whether service should be operated and make a recommendation to Sound Transit executive staff members for a final  “go” or “no-go” decision.

Since implementation of the ST protocol, staff has acted on the daily monitoring of slide probability data on 2 occasions.

The first involved Sounder North trains scheduled to operate special event service to the Seahawk game on Sunday, December 28.  Due to a forecast of significant rain and the nature of the service, a decision was made on Friday, December 26 to cancel the service.  A Friday decision allowed customers ample time to find alternative transportation. It also allowed our partner bus agencies enough time to add additional weekend service, something that would have been much more difficult to do on short notice, especially on a weekend.  In this case, a blocking slide did occur on Sunday morning just prior to what would have been the train departure time.

The second occasion occurred on Sunday, January 4.  Rain began early Saturday and significant rain was forecast for the area overnight and into Sunday.  As it turned out, actual rainfall levels were much lower than forecasted and the USGS slide indicators did not rise to the level anticipated.  A decision was made to operate on Monday morning and to reassess mid-day for Tuesday operation.  Rainfall levels in the Everett area continued to be lower than anticipated and Sounder North service continued as scheduled for the remainder of the week.  A slide fence was tripped during the Monday evening service but it was minor in nature and no other slide activity occurred.

Some Northline… it’s good however that safety is a growing priority – not statistics.  Ditto with Amtrak Cascades’ concurrent cancellations.  The question is should Sound Transit continue this service…

Special thanks to Sound Transit Paralegal Q’Deene Nagasawa for getting this PowerPoint to me.