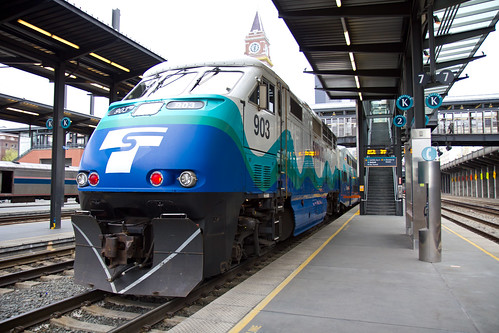 For years, doubters have said that Sounder to Olympia is impossible, or prohibitively expensive. Recently a News Tribune article reported Senator Sam Hunt as saying it would be “eons away.” None of these objections are necessarily true.

Extending Sounder to Olympia is far easier than some many think, as they don’t realize that the Capital Division branch line from East Olympia into Downtown Olympia runs within walking distance to the Capitol. The former Lacey branch line (now Woodland Trail) that would have been the preferred route and served a far greater potential for ridership was ripped out nearly 10 years ago. To rebuild the Lacey branch line would be nearly cost prohibitive considering the bridge over I-5 would need to be rebuilt, and many homes on some parts of the former right of way would have to be condemned.

The Capital Division is a branch line that serves Olympia and the Port of Olympia with roughly 10 miles of total track. Tacoma Rail leases this route from Union Pacific on a long-term agreement and UP has hinted at selling this branch line. Sounder would use 7 miles of this line between East Olympia and Downtown Olympia.

The most appropriate location I have found for a station is located between 8th Ave SE and Union Ave SE, circled above, which will provide a nearly flat walk from the station to nearly all of the Capitol buildings in 10 to 15 minutes. It is long enough between the crossings to allow an 8-car Sounder train without blocking the crossings.

The bulk of the cost would be upgrading the rail line of roughly 7 miles, including adding a storage and servicing yard in Olympia along with the installation of CTC signal and Positive Train Control (PTC). While this route would most likely be limited to 60mph, the travel time would still be less than 15 minutes.

Using a rough cost estimate, this segment would cost around $75-90 million for a simple platform, 1% art included and all necessary upgrades to Class 4 standard track.

As far as the rest of the line, it is 10 miles from East Olympia to Nisqually Junction where passenger trains will branch off via the Lakewood Subdivision, devoid of most freight trains. Improvements on the route could include a second platform at Centennial Station along with a new pedestrian overpass would add flexibility to dispatchers over the current single platform setup, minimizing delays. The upgrades on the BNSF line should be minimal, only adding a new crossover at East Olympia.

As many people know, the upgrades on the Lakewood Subdivision will be completed in 2017, which finishes the upgrades from Lakewood Station/Bridgeport Way to Nisqually Junction. This gives Sound Transit an excellent opportunity to add a station at Dupont P&R, which is right next to the Lakewood Subdivision. With this station stop, travel time from Lakewood to Downtown Olympia could be under 40 minutes, making it possible to travel from Downtown Seattle to Downtown Olympia in under 2 hours.

The most difficult segment of all of this would be negotiating track easement/time slots for the trains, which will drive up the cost and control how many trains reach Olympia. With 13 trains soon to be running between Seattle and Tacoma/Lakewood, how many realistically could continue South? Taking numbers from prior projects, I would estimate $150 to $300 million for the entire project, assuming 5 trains went all the way to Olympia.

The costs would be the following:

With all of this information, all that stands in the way is adding Thurston County to Sound Transit and funding the above. It can be done far sooner than most believe, and it makes sense to do it. Not just for Sounder, but for the added Express bus service as well.

Former STB staffer Brian Bundridge is a locomotive engineer for BNSF Railway. The views expressed are solely his own and does not reflect the views of BNSF Railway managers, supervisors, or executives.

93 Replies to “Sounder to Olympia is Not Out of Reach”