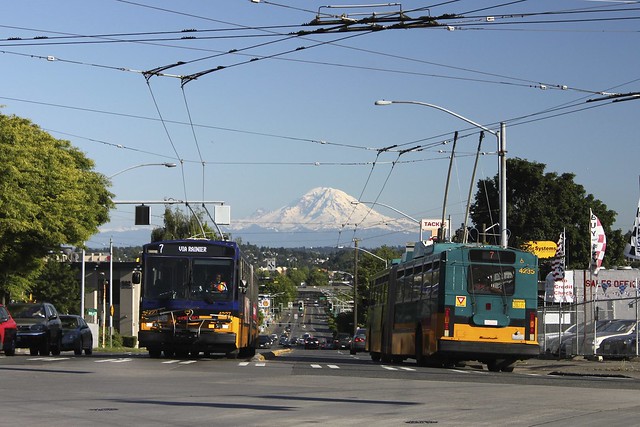 Walking up Rainier Ave. S toward the Columbia School for a community meeting on SDOT’s latest Rainier Avenue safety proposal last Thursday night, I was struck once again by what a dangerous and inconvenient street Rainier is for pretty much anyone who isn’t driving a car. Once upon a time I biked to work on Rainier almost daily, a practice that prompted City Council member and fellow cyclist Sally Clark to write a blog post, titled “Hey, Erica,” suggesting three circuitous but very helpful safer routes from Columbia City to downtown. In 2008, the council quietly shelved a proposal to reduce Rainier from four or five lanes to three, including a turning lane, at a time when the street had nearly 30 times as many crashes, per rider, as the Burke-Gilman Trail. (In 2006, the city’s updated bike master plan acknowledged that “improvement [was] needed” on Rainier, but proposed no actual improvements.)

After years of Band-Aid upgrades to nonmotorized street users’ safety – a pedestrian-activated crossing here, a safety-promoting yard sign there – it looks like the city is getting serious about safety on at least a portion of this fast-moving, accident-prone urban highway.

On Thursday, as part of Mayor Ed Murray’s “Vision Zero” transportation strategy (the zero refers to traffic deaths and serious injuries), SDOT staff presented three scenarios for reducing speeds and improving safety on Rainier. Notably, all three included rechannelization, or a “road diet.” Perhaps it’s a testament to Murray’s coalition-centric leadership style, or a reflection of his predecessor Mike McGinn’s more contentious reputation. Perhaps it’s changing attitudes and the shift away from driving alone. Whatever the reason, what was once unthinkable (a road diet? On Rainier?) is now Plan A, Plan B, and Plan C. After years of indecision from SDOT, it finally appears there’s no turning back.

“Option 1A” is the most conservative. Under this option, SDOT would rechannelize Rainier between Columbia City and Rainier Beach (S Alaska to S Henderson), reducing the road from four to three lanes, including one general purpose lane. Even this mini-rechannelization prompted histrionics among a certain faction in the crowd: One attendee said the proposed road diet would turn Lake Washington Blvd. into a freeway; another suggested that the city should encourage cyclists to commute by sidewalk instead of on the street. Clearly, there are some who will oppose even the most modest “road diet.”

“Option 1B” would combine 1A’s rechannelization with two new protected bike lanes between S Alaska St. and S Kenny St (three blocks south of S Orcas in Hillman City), along with presumably narrower general-purpose lanes. According to SDOT, this option presents “design challenges.” According to SDOT community traffic liaison Jim Curtin, option 1B would also cost far more ($1.5m+) than the other two alternatives ($500-700k), even though its span is the shortest. When asked why SDOT wasn’t proposing bike lanes all the way from Dearborn to Seward Park, SDOT traffic engineer Dongho Chang responded cryptically, “That’s a desire of ours as well.”

Finally, “Option 2” would ditch the bike lanes in favor of intermittent transit lanes, which would be located in what are now parking lanes near bus stops along Rainier. Option 2 would be the fastest for transit, but would also result in fewer parking spaces along Rainier. Asked whether it would be safe to have buses veering into cyclists’ path every couple of blocks, Curtin said, “bicycles and buses intermingle all over the city as it is today,” adding that cycling on bus-heavy corridors is actually “a pretty safe way to get around town.”

All three options, SDOT predicts, will increase car and bus travel time along the corridor by around two minutes.

Any of these options would be an improvement, and I’m hesitant to say which would be the “best,” in terms of safety, for nonmotorized roadway users. Cyclists would obviously benefit from bike lanes that are physically protected from cars whizzing by at 40mph, and bus riders would be best served by bus pullouts, which would reduce the amount of time spent sitting in backed-up traffic half a block from the next bus stop. The problem is, neither of the latter two options offer both, meaning that if cyclists “win,” bus riders “lose,” and vice versa. On the flip side, all three options are a major improvement over what we have now.

Assuming rechannelization does move forward—one notable thing about Thursday’s public meeting was how few people expressed opposition to the concept of rechannelization per se—Rainier still presents some major safety challenges, challenges SDOT will need to address if it’s really serious about “Vision Zero.”

First, in its current form, Rainier is essentially a surface-level alternative to I-5 for many commuters; although the speed limit is 30mph, it’s not uncommon (as SDOT’s presentation made clear) to see people cruising along at 40, 45, or even 50mph. SDOT plans to lower the speed limit along Rainier to 25mph, but, as one commenter pointed out, lower speed limits mean little if they aren’t enforced. (SDOT has secured grant funding for extra speed patrols along the corridor).

A second, lower-profile problem is the stunning lack of marked, signaled intersections along Rainier, where crossing “legally” can mean walking a half-mile in each direction to get to a marked crosswalk. No wonder so many transit riders and pedestrians jaywalk along Rainier, as the alternative is often untenable, especially for the elderly and disabled. Although some at last week’s meeting suggested that jaywalkers were inviting their own injuries or demise – prompting Curtin to state dryly, “There’s been crashes at nearly every place a crash could occur, so it’s something other than behavior” – the reality is that the city makes it very difficult to cross the street to get to destinations like the Rainier Food Bank, which serves a largely elderly population. The lack of intersections is therefore both a transportation problem and an equity problem, one that could be at least partially addressed by installing pedestrian-activated crossing signals like the one at 39th and Pearl St. in Columbia City.

Despite their drawbacks, rechannelizations do work to reduce crashes and lower traffic speeds. On Nickerson St., for example, where SDOT reduced five lanes to three and installed two new marked crosswalks, collisions went down 23 percent and the number of people driving 10mph or more over the speed limit was reduced by 94 percent. Other road diets have led to similar safety improvements. If Rainier’s rechannelization is a success, it will be yet another piece of evidence that, far from slowing cars, destroying needed parking, or creating nightmare traffic congestion, road diets actually work to improve safety, reduce collisions, and slow down speeding drivers who are endangering themselves as much as those with whom they share the road.