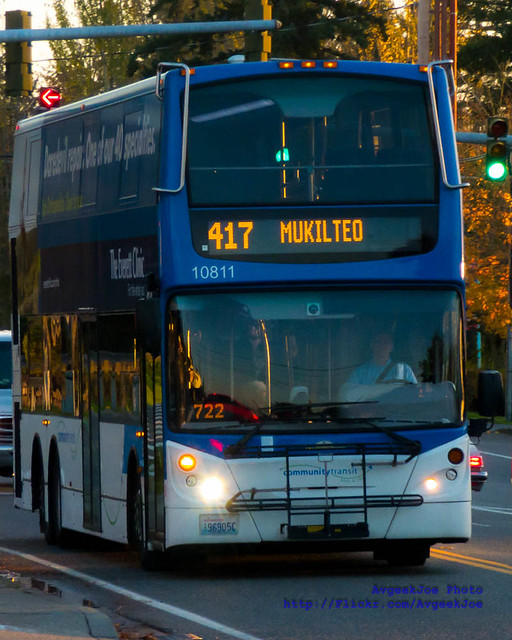 My snap of a Community Transit Double Tall.

Just finally became aware today of Community Transit’s draft annual Transit Development Plan update (hereafter CT Draft TDP for brevity) towards a very bold vision of, “Transit will be the first choice, not just for commuting to work but for all travel” (Page 5 of THIS PDF).  STB transit geeks this weekend might want to eke out time and write a comment letter to planupdate-AT-commtrans-DOT-org because you’ve got only until April 3rd to comment.

However, before you write off your wish list to Community Transit, you might want to note the CT Draft TDP has some interesting points:

Again, comments are due on the CT Draft TDP by 3 April so don’t delay, e-mail planupdate-AT-commtrans.org your thoughts this weekend or next as you’ve only got two weeks from today.  So if you want more bus service, a new bus stop or just want to atta-boy Community Transit, please make the time to submit comment.  Arguably resources are taken from service hours to prepare transit development plans so ridership can give feedback, so please by 3 April e-mail planupdate-AT-commtrans.org your thoughts on the CT Draft TDP.