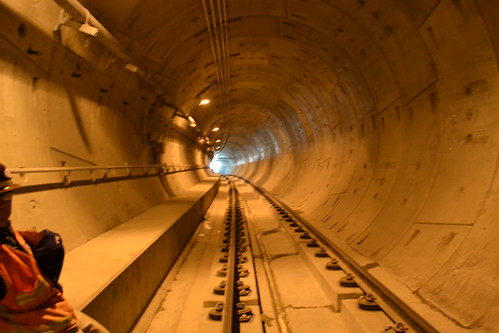 Sound Transit’s ridership forecasts suggest that 15 trains per hour (every four minutes) between Northgate and the International District are sufficient for peak demand on that segment through 2030. This allows a train roughly every 8 minutes to Des Moines and every 8 minutes to Redmond.

Of course, forecasts are hard, and factors completely outside Sound Transit’s control might cause ridership to dramatically exceed or undershoot those forecasts. Things that Sound Transit does control, like Sound Transit 3 investments, would likely increase demand on this segment and could, optimistically, be open by 2030. Furthermore, the safest assumption is continued population and ridership growth after 2030. So what capacity is supported by the infrastructure under construction now?

In an effort to cut through some of the urban legends surrounding this question, I spoke with Marie Olson, Sound Transit’s Link Transportation Manager for Operations. As it turns out, Sound Transit’s signaling system is designed for a minimum 90 second headways. Ms. Olson believes that if the demand were there, 3 minute headways are achievable without significant deterioration in trip quality. SDOT thinks its signaling system on MLK’s surface segment can support 6 minute headways, so 3 minute headways neatly divides into 10 trains per hour to both the Rainier Valley and the Eastside. Planned fleet purchases are large enough to support 4-car trains at this rate.

Although going below 3 minutes is possible, due to the variability inherent with human factors and surface operations it “wouldn’t give our ridership as reliable a service.” The small windows to fit in delayed trains might cause them to bunch up, delaying riders. Furthermore, it would likely require additional investment in Traction Power Substations.

There’s also the question of where to put the trains. At 30 trains per hour, 10 of them can go neither to Bellevue nor the Rainier Valley. It’s possible that the pocket track planned for International District might be able to reverse trains, although it’s not really designed for that movement during peak operations. Alternatively, the extra trains could turn at Stadium, if Seattle were to accept a lower traffic level of service on Royal Brougham Way (or close it entirely). “It’s something we’d have to look at in simulation,” Olson said.

I specifically asked about the deleted Montlake vent shaft, often cited in STB comment threads as a constraint on tunnel throughput. Ms. Olson denied that it was one; in fact, when ST deleted the shaft they placed a signal at the midpoint between Capitol Hill and UW. This allows two trains in the three-minute segment between the stations, which means it has the same fundamental 90-second limit as the rest of the signaling system.

At Tokyo-style crowding levels, 20 trains per hour is 16,000 people per hour per direction. Of course, at that level of crowding headway limitations may be driven most by the dwell times needed to deboard. Here’s hoping that the system is popular enough to require that level of service.

184 Replies to “Capacity Limitations of Link”