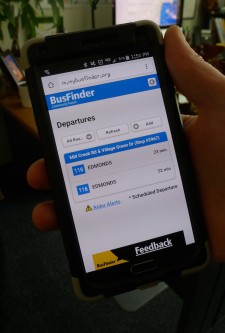 Community Transit has joined the real time rider information party, although the data is as yet only available through their own website, not OneBusAway:

Customers can access BusFinder at www.mybusfinder.org on their computer or mobile device, or by calling Community Transit’s customer service phone line at (425) 353-7433 (RIDE) and selecting Option 1.

Mobile device users will be redirected to a mobile version of BusFinder. The mobile version is a web-based application, not an app that needs to be downloaded.

BusFinder works best by entering the bus stop number found at all Community Transit bus stops. Users can also enter a stop name, which is the primary street of the bus stop followed by the nearest cross street. The program is intuitive, so entering a primary street will create a list of options from which you can choose your stop.

Riders catching buses in King County should use the Map or Nearby Stops features to find their stop, as Community Transit stop numbers are not displayed on Metro bus stops. Once a stop is found, it can be saved in Favorites for future use.

CT Spokesman Martin Munguia tells me that publishing a real time feed for consumption by OneBusAway and other apps is on their radar, but as yet has no firm ETA; their team is focused on working out the kinks with their own site first. He also clarified that , and alluded unspecifically to “a couple of alternative solutions for King County stops that I hope will be implemented by this summer.”

UPDATE: Apparently, King County transit center signage does not include CT stop numbers, but  “We are working on a solution, vague as that may sound. There are options and we are in negotiation on the best and quickest to implement.”

I’m thrilled to see CT make this leap in usability. Real-time arrival data, on all but the highest-frequency routes (few of which really exist in Washington), is something which I can no longer function without, and I know I’m not the only one. Up-to-date confirmation that the bus is on its way is priceless to riders. I will say, though, that the real champagne moment for most riders will be when CT is plumbed into OneBusAway, the de facto virtual transit interface for Puget Sound.

I have questions out to the current OneBusAway maintainers at Sound Transit to see if any other agencies are in the pipeline, but I can separately confirm one: Spokane Transit will launch a public beta of their own real time service late this spring, with a public feed to follow shortly thereafter.

Once CT and STA are on OneBusAway, the five biggest bus agencies in the state will be on a single real time app — a huge measure of convenience for travelers. Next up: Sound Transit needs to get its rail services up to speed with its buses, C-TRAN needs to gets its own real time service (Next Ride) on OneBusAway, and Whatcom Transit needs to get itself a real-time service. I know the latter two can do it, because they’ve been beaten to the punch by smaller-but-scrappy Intercity Transit.